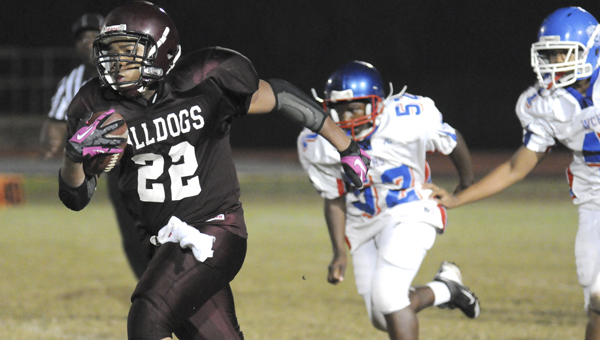 The R.B. Hudson Bulldogs maintained control the entire way, as they took a 28-12 homecoming win over the Camden Jaguars Tuesday at Memorial Stadium.

Ivery Williams, head football coach of R.B. Hudson (5-0), said the Bulldogs got strong play from both sides of the football, but especially from the defense.

“Both sides played real well on offense and defense. I think our defense stood out. We’ve got a lot of players playing both ways, and we’ve got some standout players,” Williams said. “We’ve had some kids stand out all year, Jaquan Norwood, Armoni Webb. Those are seventh graders. We’ve got kids like that playing hard for us. I want to thank coach Jerry Smith — the defensive coordinator, coach Mason Dunn — the offensive coordinator, and Derek Randolph on special teams. I think they’ve done an outstanding job with our kids this year.”

The Bulldogs got on the board on their first drive of the game, as Ja’lon Witherspoon scored on a 3-yard touchdown run to put R.B. Hudson up 6-0 with 4:20 left in the first quarter.

R.B. Hudson added one more score in the opening period, as Ta’Qwillis Chappelle scored on a 9-yard touchdown run with five seconds left in the first.

Camden answered back with a touchdown pass that made the score 12-6 with 33 seconds left in the first half, but the Bulldogs responded immediately when Richard Rembert returned the ensuing kickoff more than 80 yards for a touchdown with 15 seconds left in the half. Brandon Hatcher ran in the 2-point conversion to make it 20-6 at halftime.

The Bulldogs’ final score came in the fourth quarter when fullback Ladarius Woods broke straight up the middle for a 59-yard touchdown run with 5:15 left in the game. Malkijah Undewood ran in the 2-point conversion to make the score 28-6.

Camden added the final score with 25 seconds left in the game.

Williams said he’s glad that his team is still undefeated, but expects a tough matchup on Tuesday at 6 p.m. on the road against Demopolis.