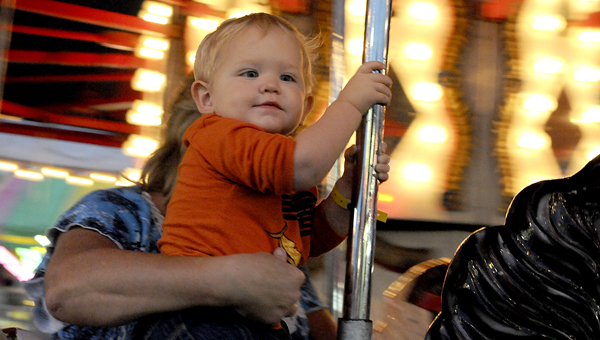 This little man was just one of the hundreds to take a spin on the merry-go-round Monday during the opening night of the 2012 Central Alabama Fair in Selma. For more photos log on to www.facebook.com/selmatimesjournal. -- Tim Reeves

Selma residents and out-of-towners flocked to the Old Armory for the opening night of the Central Alabama Fair to get their funnel cake, ride the Ferris wheel and of course, chow down on a “Cozy Dog.”

Scott Haskell, president of the fair and the Selma Lions Club, which hosts the event, said the day couldn’t have gotten off to a better start.

Some of the many fair attractions included; rides for adults and children, bull riding, a bingo hut and the Junior Miss Central Alabama Fair pageant.

Haskell said he hopes this year’s fair will generate the most attendees and the most revenue of any fair to date.

“We want as many people to come out as possible because all the money goes back to the city,” he said. Monday, Wednesday and Saturday, a special deal will be offered for all those who love riding the fair rides.

“Monday, Wednesday and Saturday is armband night, so we’ll have those offered from 5:30 p.m. until closing,” Haskell said.

For $15, fairgoers can purchase a wristband and ride as many rides as they wish.

“We got a new ride this year called the Cliff Hanger,” Haskell added. “It’s like a Superman ride where you lay down and ride it.”

Along with the Cliff Hanger, the fair also offers the signature rides — the Ferris wheel, the Scrambler, a carousel, and many others.

“We might have a rodeo in the middle of the week, but we’re not sure yet,” Haskell said.

All of the proceeds from the fair will go to support local charities.

“All the money we make off this fair, every single penny of it minus the 10 percent we use for the next years fair, it all goes back to the community,” Haskell said.

And the rest of the week will only get better, Haskell added.

“Come out to the fair, you’ll have a great time and all the money you spend is coming right back to your town,” Haskell said.

Gates open at 5:30 p.m. Tuesday and the Miss Central Alabama Fair pageant will be held at 7 p.m.