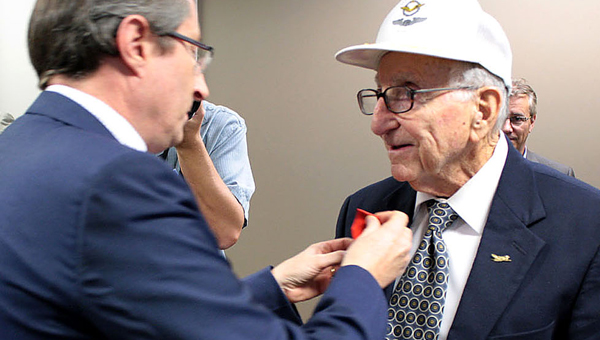 ATLANTA — Twelve World War II veterans were decorated with the National Order of the Legion of Honor Thursday in the name of the President of the Republic of France for defending France in the war. All 12 veterans were American — not French. Among those honored at the ceremony, hosted by the Consulate General of France in Atlanta, was Selma resident Richard Gibian.

“When I was a child, I visited the beaches of Normandy, as well as the American military cemetery in Colleville-sur-Mer,” French Consulate General Denis Barbet said. “I was able to measure the sum of courage necessary to cross the defense lines, a courage that was often paid for at the cost of life in order to liberate France and Europe.”

Barbet said the award bestowed on the veterans was France’s highest honor and one of the most coveted in the world. It was created in 1802 by then Emperor Napoleon to recognize those who have, “demonstrated exceptional courage, bravery and a spirit of sacrifice beyond the ordinary, particularly in the military domain.”

Gibian was the first awarded in order of seniority. He sat with the other honorees in his Thunderbird Aviation hat and a smile. Barbet highlighted some of Gibian’s experience in the war and his role in liberating France.

“Gibian’s air squadron performed several air support and combat missions during the storming of Normandy and later on in the northeast of France,” Barbet said about Gibian, who joined the Air Force in December 1942 and joined the 373rd combat group of the 411th squadron, 9th Air Force as a captain. “They bombed and destroyed a variety of German means of transportation.”

Those honored Thursday all had individual stories of hope and desperation from the war times, but all had a common thread to cling to — they survived. After the veterans were pinned by the consult, each stood in front of the several hundred in the room to show their appreciation for the honor and something from their hearts.

“We just think about those who never came home,” Gibian told the crowd. Several of the veterans who spoke about accepting the award for soldiers who did not make it home moved the crowd to tears.

“I am just one of the guys that got the medal. The rest of them didn’t make it,” Gibian said. “I didn’t do anything more than they did. We lost a lot of guys.”

LOCKED UP: Gov. Robert Bentley weighed in on the issue of blocking access to the Alabama River. A day after... read more