Taking time to celebrate a day of recovery 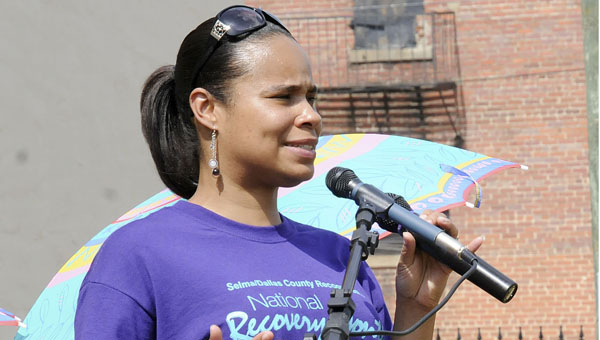 A sea of purple shirts and balloons flooded Phoenix Park Friday as residents celebrated National Recovery Month—a month dedicated to recognizing those who have fought, or who are fighting an addiction to drugs or alcohol.

Testimonies were given by several citizens who overcame their addiction, and WHBB was there to broadcast their stories live.

Miah Jackson, assistant director of Dallas County Court Service, said she was very pleased with the turnout of the event.

“We had about 20 people tell their stories of recovery,” Jackson said. “It’s so empowering to hear these people say ‘I’m recovering and I will recover.’” Residents also enjoyed free food, which was donated mostly from Coca-Cola and Zeigler’s.

District Judge, Bob Armstrong, said he believes one of the best ways to reduce crime in our community is by reducing drug use.

“We see so many in our courts, a vast majority, I’d say 66 percent of the people that are in court for criminal behavior also have substance abuses,” Armstrong said. “They’re addicted to drugs.”

And when these individuals are charged with a crime, Armstrong said they usually go to jail and then are released and begin using drugs and doing criminal activity again—“it’s a cycle,” he said. To stop this cycle, the drug courts in Dallas County have implemented a program to help those using drugs to recover from their addictions.

There is a family court that deals with child abuse and neglect, Armstrong said, and there is also an adult court.

“It’s a very effective program,” Armstrong said. “We’re seeing great successes and getting people out of the drug culture and in to productive things in the community and restoring family and giving people hope.”

Veronica Winston, a current participant in the program, said “getting clean” has changed her life

“In the beginning it was hard because I was still using drugs,” Winston said. “But then it started getting easier. I’m doing a whole lot better now, I’m not wasting my time and money on drugs.”

Winston now has her daughter back and is working on getting her GED.

Selma youth will have the opportunity to combine their love for hunting and their faith Oct. 11, as the Elkdale... read more