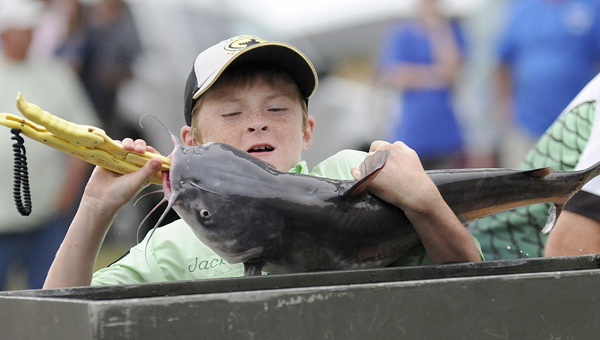 Above, Jackson Mitchell, 9, from Albertville, Ala., unloads one of the catfish his team reeled in during the two-day Cabela’s King Kat Classic in Selma. Jackson fished with his father, Mike, and grandfather, Sammy. -- Tim Reeves

Those who fish are known for their ability to tell a story, just as much as they are known for how to bait a hook or cast a line. In the case of those who helped lure, organize and pull off the 2012 Cabela’s King Kat Classic tournament in Selma, they hope the stories the participating fishermen are telling are about how great the tournament was, and how successful Selma was in playing host.

“There is nothing like Southern hospitality in Selma. I was telling somebody the other day, if you look up Selma in the dictionary, it is right beside Southern hospitality,” Cabela’s Outdoor Promotion president Darrell Van Vactor said. “Good food, good friendships and just a fantastic area to bring your family, and I think that we have seen by the results of these past two days that there is some fantastic fishing here, too.”

As for the results, a team from Columbus, Ohio took top honors, bringing in a total of 206.05 pounds during the two-day tournament. Carl Morris Jr. and Sean Martin were in second place after Friday’s action, but brought in a total of 107.20 pounds Saturday. 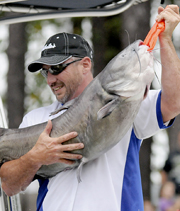 Carl Morris Jr. , part of the two-man team that won the 2012 Cabela’s King Kat Classic Saturday in Selma, unloads one of his team’s big catches Saturday afternoon. Morris and Sean Martin caught a total of 206.05 pounds of catfish during the two-day tournament. The national tournament attracted a total of 61 teams from 19 states.

Morris said over the two days, he and Martin caught around 25 fish. The limit at each weigh-in was five, so any others had to be put back. The entire tournament was a catch-and-release tournament, with the fish being placed right back in the river after each weigh-in.

While Martin and Morris proved to be the big tournament winners, the biggest winner might very well be the city of Selma. Area hotels were home to the 61 teams that represented 19 states. Local restaurants served as their kitchens and dining rooms, and area gas stations saw plenty of boats filling up for runs up and down the Alabama River.

“Because the city helps sponsor these tournaments, I make sure I do my shopping in town during our stay,” Amanda Martin said. Martin’s boyfriend, Carl Morris, was on the winning team. “I came into downtown Selma and bought two Christmas presents while I was here and ate at the Tally-Ho and loved it.

“I have never ever met nicer people than I did here in Selma,” Martin said.

Elton Reece, the director of Selma’s Parks and Recreation Department, couldn’t help but be pleased at the success of the tournament and the turnout.

“I feel like we just won our first Dixie world series championship in baseball in 1973 and that is how I feel right now,” Reece, a long-time youth baseball coach, said. “When you just look out and see all of these people grinning and just enjoying this, it makes me feel great about what we’ve been able to pull off.”

The city hosted a King Kat qualifying tournament in June. The King Kat Classic is the final tournament of the annual Cabela’s King Kat Tournament Trail.

The brother team of Jason and Daryl Masingale, who led after day one of the tournament with 99.65 pounds, came in second after tallying 93.9 pounds on Saturday for a two-day total of 193.55 pounds.

Richard and Dorothy Stocks, from Valley Grande, earned their position in the year-end championship tournament with their performance at the June qualifying tournament. They finished 14th overall with a two-day total of 36.85 pounds. The team was in tenth place after day one.

The largest catfish caught over the two days was brought in by the Jason and Daryl Masingale, who caught a 37.15 pound catfish on Friday.