Retailer chips in for Edgewood teachers 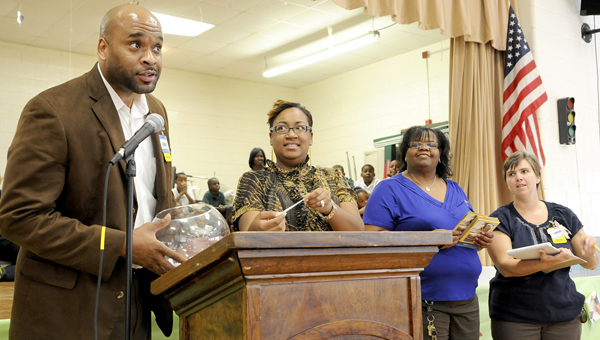 It is no secret that teachers often spend their own money in order to meet the needs of both their students and classrooms, and do so without being recognized for going above and beyond to help their students succeed. However, 20 Edgewood Elementary School teachers were recognized for their efforts and presented with funding to offset classroom expenses by the Walmart Teacher Rewards program Thursday.

“We know that in these challenging times you and teachers across this country continue to provide for them out of your own pockets to maximize their learning experience,” Selma Walmart store manager Emmitt Jackson said in a speech addressing the entire school as they gathered in the cafeteria. “Whether it’s a child who needs a pencil because his is a stub, or a child who cannot learn because she is hungry and cannot concentrate, we know that you use your own money to meet the needs of those children so that they can learn.”

Jackson specifically addressed the teachers when he said, “Walmart wants to help offset the money that you spend out of your own pockets for classroom supplies during this back-to-school season.”

In an effort to do just that, Walmart launched their fourth annual Teacher Rewards program which will provide up to $4.5 million to 90,000 teachers across the nation this fall, Jackson said.

Edgewood Elementary was randomly selected to be honored by the Walmart Teacher Rewards program this year. Twenty-seven teachers had their name in a large glass fish bowl and 20 were randomly selected to receive a $50 Walmart rewards card to purchase classroom supplies that will help students to “start the year off right,” Jackson said.

The names of the teachers that were not called out, however, still left the school today as winners.

“We took it upon ourselves as a store,” Jackson said, “to provide [the teachers who did not win the $50 Walmart rewards card] with $20 Walmart gift cards.”

“All the teachers were awarded,” he said.

After fourth grade teacher Nicole Tolbert’s name was called to receive a $50 Walmart rewards card she said, “I think it’s awesome. I really didn’t know how I would get my kids some supplies, so now we’re going to come together tomorrow and we’re going to decide what we’re going to buy for the class.”

Tolbert said the students in her classroom will have a say in what the gift card is used for. “I’m so excited,” she said.

Fifth grade teacher Corey Jones was also excited after being selected to win one of the twenty rewards cards.

“It’s rewarding, not just for me, but for the students,” Jones said. “It’s great that Walmart would take the opportunity to give back.”

Jones noted that many times he and other teachers spend money out of their own pockets, “and we’re never rewarded for it,” he said. “It just feels good for somebody to thank you for what you’re doing.”

“It definitely helps for our teachers to be recognized and be given an incentive like this. It gives them a little bit of motivation and encouragement that somebody does care about the work they do everyday,” he said. “For this number of teachers, at one time, to be recognized and given some sort of assistance in this manner is going to help them in their classroom.”

Peterson said he was thankful Walmart thought of Edgewood this year.

“I feel like it’s outstanding,” he said. ‘It’s a blessing for our school to be recognized and also to be thought of in this manner by a corporation as a large as Walmart. For our school to picked out of all the schools in the city, we just feel real special.”