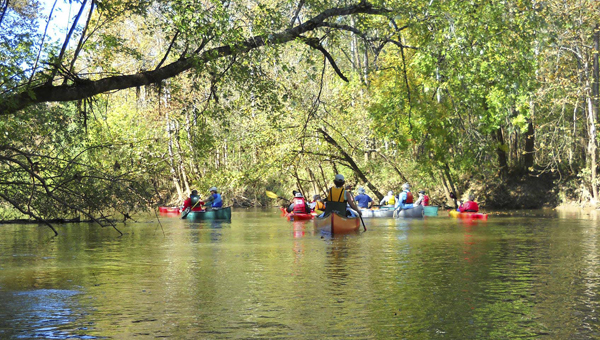 The US Army Corps of Engineers is implementing a plan that will limit traffic through the locks on the Alabama River to commercial traffic only, by appointment. Once the plan is implimented, no recreational traffic will be permitted to pass through the locks. -- Photo courtesy of the Alabama Scenic River Trail

Recreational use of the Alabama River is about to go through some changes, changes that will affect both the people who enjoy using the river and cities, like Selma, who are stationed along the river and benefit from river traffic.

According to memos from the U.S. Army Corps of Engineers, rivers with “limited commercial traffic, with no consistent pattern of lockage” will now allow service by appointment only. The Alabama River now falls under this category.

This means that Corps Engineers will operate the locks, allowing passage through the Alabama River to commercial traffic only, by appointment only. According to memos, the plan will be implemented on Oct. 7, meaning after that date recreational traffic on the Alabama River will not be permitted.

“The headquarters Corps had put together this policy that they will service locks. The level of service of the locks will depend on the number of lockage [in a year], i.e. the number of boats that pass through a lock on an annual basis,” Jerry Sailors, president of the Coosa-Alabama River Improvement Association explained. “Relatively, the Alabama River locks are used less then many locks on other waterways.”

Sailors said when the Corps sees that overall, the traffic is low, “they have decided that productivity isn’t enough. So they will not, as a general policy, accommodate boaters because it costs lots of money for them to lock through those boats. When it’s a kayak or a canoe or something like that, it’s really not very productive.”

This is a plan that Jim Felder, executive director of the Alabama Scenic River Trail described as, “a short-sighted, cost cutting exercise from Washington.”

Felder said this plan is a death message to river traffic.

“The public hasn’t been told this, they don’t realize it, but this is a final thing,” Felder said. “Once you put up a billboard that says, ‘Our locks are only open to commercial traffic, by appointment,’ you’ve put up a billboard that says ‘Go away, we don’t want you on our river.’ Nobody’s going to come here. This is a death message to commercial traffic on the river, and anybody who hauls heavy cargo would know it.”

The thing that seems to be the most troubling about the Corps of Engineers’ implementation plan isn’t they are taking away recreational use of the river, but the fact the decisions were made without first hearing the concerns of the people who actually use the river.

Sailors agreed, and that is why he is currently working to arrange a meeting between the Mobile District, which is the Corps representative that has operational responsibility for the Alabama River, and the river’s stakeholders.

“In the latest discussions I’ve had with the district, I’ve asked them if they would be willing to attend an open, public meeting of folks in the Black Belt area sometime over the next few weeks,” Sailors said. “Then they can listen to what some of the stakeholders are saying and maybe the district itself can explain what exactly the circumstances are; why they’re doing this, and what their plan is going to be.”

News of the low-use system implementation plan made it’s way to Washington this week. U.S. Senator Jeff Sessions (R-Ala.) is not only aware of the situation, but is concerned about it.

“I’m disappointed at the Corps,” Sessions, a native of Wilcox County, said. “They did not handle this in an open way. Public hearings, providing an opportunity for input, doing a real professional evaluation, I think that would have included makeing the congressional delegation aware of it (before now).”

Sessions acknowledge there will be cost-cutting throughout this government, and that there is no money to waste, however, he said, “there’s got to be a reasonable opportunity for people to move their commercial boats and recreational boats [on the river].”

Reasonable opportunity, he said, would start with the Corps listening to the concerns of the stakeholders.

“It may not be possible to have 24-hours a day, seven days a week lock service. Particularly, if the records show there’s just not enough traffic to justify it,” Sessions said. “I just don’t think we can accept a situation in which a recreational boater is not able, on any kind of reasonable schedule to move his boat up and down the river.”

Sessions has drafted a letter to the Corps that he plans to send out on Monday, Sept. 17.

“I intend to communicate with the Corps, and I’m going to insist they talk with the people who’ve been affected by this,” he said. “We’ll get the facts and see where it goes from there.”

Candace Johnson, the Selma-Dallas County Tourism director is one of many who would like answers.

“We just want to be kept up-to-date on that information, and see how we can work best with the groups that are there to help our voice be heard, and help make citizens aware of how very important our river is,” she said.

Johnson doesn’t yet know what type of economic impact closing recreational river traffic will have on Selma.

“We certainly are focusing a lot more on our river lately, and any setbacks could throw back everything,” Johnson said. “We do not want any setbacks.”

Johnson said the river offers a great economic impact for tourism in Selma, one that the city is just beginning to really tap into.

“We have a big stake in the river,” she said. “We certainly want to do anything we can to be proactive in that.”

Being proactive is something that Felder and the Alabama Scenic River Trail are doing. Felder started an online petition in an attempt to push back against the decision of Corps of Engineers. On Saturday, Sept. 15 the petition had more than 800 supporters.

“At the heart of it all, a freedom has been denied us that we didn’t have any say-so in, and the minimum that we’re asking is for someone from the Corps to reconsider this,” Felder said. “There are a lot of creative compromises that we have come up with in Alabama. So far, those have fallen on deaf ears.”

The Times-Journal made multiple attempts to contact the Corps of Engineers.

Retailer chips in for Edgewood teachers