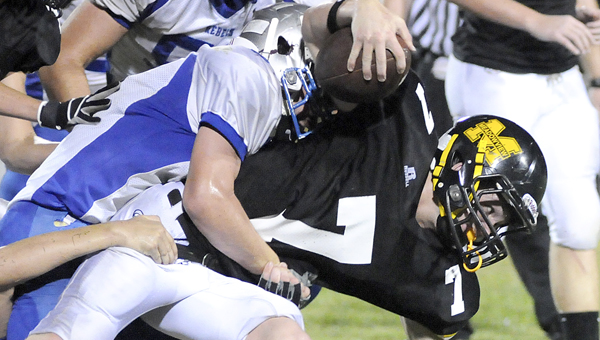 The Chambers Academy Rebels traveled to Selma Friday night, bringing along a high-flying spread offense and looking to stop a powerful Trojan rushing attack. Unfortunately for the Rebels, they were unable to get a handle the Meadowview attack and suffered through far too many mistakes of their own to win.

In the end, Meadowview cruised to their second straight victory of the season, crushing Chambers 67-7. Meadowview improves to 2-2 on the year with the win, while Chambers remains winless at 0-5.

“We came out flat but eventually woke up. Our defense played great and forced a lot of turnovers, plus we were able to execute on offense,” Meadowview head coach Lebo Jones said. “It was a really good night for Trojan football.”

On the other sideline, Chambers head coach Shannon Motley, was searching for answers in a game so heavily dominated by Meadowview.

“We missed some assignments and we’re just really young right now, we’re trying to rebuild and I only have three seniors on the team,” Motley said, adding six turnovers proved far too much to overcome. “We’d move the football 40 to 50 yards and then we’d turn the ball over. Our team has a lot of work to do.”

To start the game, the Rebels’ Zach Yarbrough ran the kickoff back 75 yards and scored their only points of the night. Quarterback Russ Whaley completed seven of 24 passing attempts for 137 yards, but threw three costly interceptions.

The Meadowview Trojans rushed at will, easily cutting the Rebel defense and racking up over 370 yards on the ground. The Trojans added another 84 yards through the air.

Meadowview running back Dylan Lawrence led the Trojans offense with 229 yards on 11 carries. Four of the eleven went for touchdowns, the longest being a 36-yard scamper. On defense, Lawrence also intercepted the Rebel quarterback three times, returning two of them for touchdowns.

Meadowview led 40-7 at the half and began to substitute players beginning in the third quarter.

Meadowview Christian will host Jackson Academy next Friday. Kickoff is set for 7 p.m.

Keith quarterback Maurice Crumpton (2) tries to get off a pass before Ellwood’s Raheem Velazquez (32) can sack him. Crumpton... read more