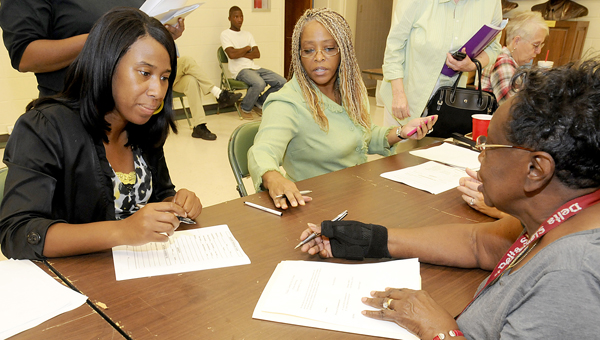 Selma residents flooded the Convention Center Wednesday to report their damage from the recent flash flooding. Volunteers with the EMA helped citizens fill out forms which will be used to determine the significance of the flooding. -- Sarah Cook

In an effort to receive monetary help from FEMA, residents poured into the Convention Center Wednesday to report their damage from the recent flash flooding.

“Our main goal right now is just to get damage reported to us,” said Rhonda Abbott, Dallas County EMA director. “We will make their request to the state, but we just need something visible to give them, so that’s just our main thing right now is getting the damage reported.”

Citizens showed up by the many with pictures of flooded front yards and floating tile floors in hopes that they will receive help.

“I had damage from a fallen tree on Labor Day,” said Selma resident Carletta Jones. “It rained in my house all through Monday night and then Tuesday throughout the flood. I had to get rescued out by the fire department because the whole tree was blocking the front of the house.”

Jones also said because of severe water damage her house is currently inhabitable and she has been living in a hotel.

“There is no dollar threshold that FEMA looks at and says ‘ok, you have to get to x amount of dollars before we declare an emergency,’” Jones said. “It’s based on the amount of people and the demographics of the area.”

After reporting damage to local officials, Jones said officials then request that the state come to the area and assess the damage. Then, a request will be made to FEMA for help and compensation.

Jones said while he served as EMA director for Montgomery in 2009, the city experienced extensive flooding similar to what Dallas County felt, so he knew it was important to come speak with Selma residents.

“We’re going to do what we can and we will fight for you ‘til we can’t anymore and once it gets in FEMA’s hands, it’s on them,” Jones said. “But we know at the end of the day, when we put our heads down at night, that we have done our due diligence to help the people of Dallas County.”

To report damage, residents can contact Rhonda Abbott at 874-2515.

City could be looking for new garbage system

A scheduled work session by the Selma City Council could lay out details about a proposed plan that would have... read more