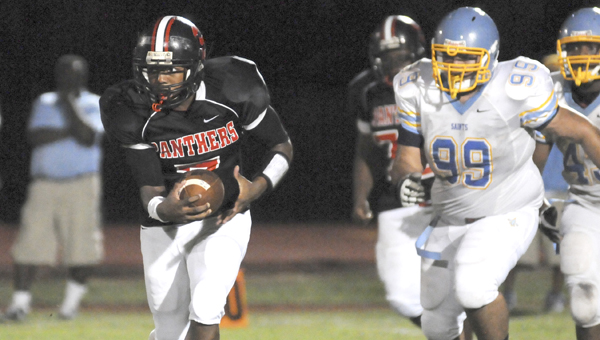 Southside quarterback Khamari Gibbs scrambles during a game against Selma High School earlier this season. Gibbs was one of the key players in the Panthers’ first win of the season last week. -- Robert Hudson

After capturing their first win of the season last week, the Southside High School Panthers are looking to maintain the momentum going into their second straight region contest.

“I think their confidence has skyrocketed right now,” Flowers said. “First, they were told that they couldn’t win because I came in so late, but now that they’ve won, they think they can win every game.”

Flowers said the Tigers are a team that likes to run the ball with a triple-option attack.

“They run the flexbone, a type of double-wing offense like Georgia Tech runs,” Flowers said. “They do a lot of triple option, they do a lot of belly, and they do some reverses. They’re a team that likes to run the ball, get you to think they’re going to run it up the middle all the time, then try to hit you with a run to the outside. They’re very strong and big up front, too.”

The Tigers’ offense is one that utilizes a lot of misdirection, which Flowers said makes it one of the toughest offenses the Panthers will face this season.

Flowers added it’s important that each player does his job on defense to contain the option.

“We’ve been preaching that so much about doing your job. We’ve been telling our defensive ends to make sure they get the quarterback,” Flowers said. “Cornerbacks and safeties, make sure you get the pitch man. Linebackers, make sure you fill the alleyway. It’s so important to do your job because one person could mess their job up and the next thing you know they’ve got a 50-yard run out the gate on us.”

Ultimately, Flowers said the game will come down to who can best establish the run.

“My thing is, if we can run the football well and get a few plays where we jump out to a good start, I think we can win the ball game,” Flowers said. “If we stop their run and we run it well, I think we’ll win again.”

Dallas County High School’s De’Undria Boggs, right, tries to stop a return at the net during a home game against... read more