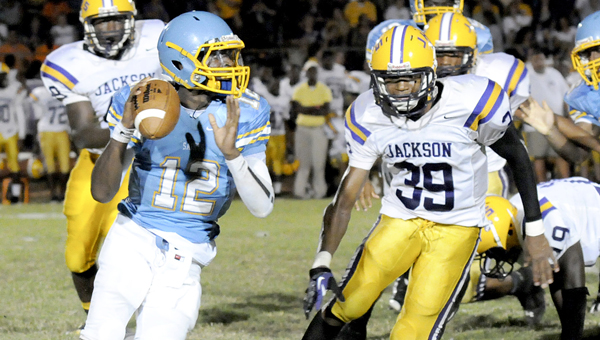 Selma High quarterback Jesse Harris scrambles from a host of Aggie defenders, including Deshawn Hunt (39). The Aggie defense led the way for Jackson, as they held the Saints to zero yards in the first half. Jackson defeated Selma 53-14 to remain undefeated. Selma fell to 1-1 with the loss. -- Tim Reeves

The Jackson Aggies came to Selma with a spotless record — not just for the current season — but for the past year as well. The defending Class 5A state champions showed why many believe they have a great chance to repeat as they throttled the Selma Saints at Memorial Stadium 54-13.

From their first possession, throughout the first half and even with their third, fourth and maybe even their fifth string players in the game, the Aggies were able to control the game to improve to 2-0 on the season and 1-0 in Class 5A Region 3.

“I think we were able to get five quarterbacks in tonight and play just about everyone we had,” Jackson head coach Danny Powell said. “At this point in the season, we are really focused on our 1s and 2s, but it was still nice to get everyone some reps.”

And, it was nice for Powell to see his defense nearly pitch a shutout — a shutout in more then just the scoreboard.

At the end of the first half, the Aggies had held the Saints to zero net yards of offense, thanks to a number of sacks and tackles in the Saints backfield.

“Our defense is pretty fast and our coaches do a great job getting them prepared,” Powell said. “We have a lot of speed on that side of the ball and they came out tonight and played extremely well for the time they were in the game.”

On the other side of the ball, the mood was not as positive.

Selma head coach Leroy Miles had to be concerned about his team giving up 412 yards of total offense to the Aggies, while his Saints were only able to ground out 114 yards on their end, many of that coming late in the game against Jackson’s back-ups.

“We were not able to do much of anything tonight, but we are going to have to learn from this, put this game behind us quickly,” Miles said. “I told our players that we faced a very good football team tonight, a program that we want to build toward. But, we have our first road game next week and we have to start focusing on that game.”

Jackson’s attack came mainly through the air, as their quarterbacks combined for 261 yards passing and five touchdowns. On the ground, the Aggies had another 151 yards and two touchdowns. Jackson even added a touchdown on a fumble recovery in the end zone.

In fact, Jackson scored touchdowns on their first five possessions, taking a 40-0 lead into halftime.

Matthew Jordan was 5-for-8 for 94 yards and two touchdowns in limited action.

On the ground, the Aggies were led by Jerel Foreman, who had 36 yards rushing and one touchdown. Ledarrius Bowe added another 32 yards and a touchdown of his own on the evening.

For Selma, Darrius Hawkins had 58 yards rushing, most of that coming on a 56-yard touchdown run in the fourth quarter. Jesse Boggs was the second-leading rusher on the night for Selma, adding 30 yards, all on a fourth quarter score.