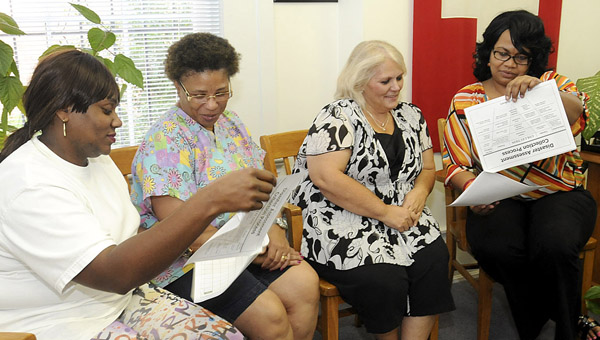 As recent weather has proven, being prepared for natural disasters, like flash flooding, is paramount.

Citizens gathered Thursday for a disaster training assessment workshop to discuss preparedness and a course of action for when disaster strikes.

Jakki Phillips, executive director for the Black Belt American Red Cross, discussed the disaster action team that she is trying to put in place.

“The disaster action team, when something catastrophic happens, they’re the ones who are going to be the eyes of this office out in the community, telling us just how widespread the damage is and how intense it is,” Phillips said.

Once an action plan is put in place, Phillips said this would allow the community to receive the necessary resources for recovery.

Phillips went over paperwork with attendees and explained procedures for evaluating home damage, which includes affected, minor, major and destroyed.

Most of the homes affected by the recent flash flooding fell under “minor” because there was less than 6 inches of water damage, Phillips said.

“But if we would have had a tornado, we would have had roofing damage and other things,” Phillips said. “And we know that anybody whose roof is off, that’s major because that would mean the house is inhabitable.”

Other things mentioned during the workshop were simple terminology and an understanding of abbreviations used by the Red Cross.

“We certainly want everyone to stay interested and come back,” Phillips said. “There is a beginners disaster course online, and if you don’t have Internet you can certainly come up here and do it.”

A follow-up session will be held Sept. 20, which will go in to more depth on the program and include a video. It will be held at the Red Cross headquarters, 812 Selma Ave., at 5:30 p.m. For more information, contact Phillips at 874-4641.

The clean up process begins in Isaac’s aftermath

As citizens started to clean up the mess in their homes from Tuesday’s storms, some had to take things out... read more