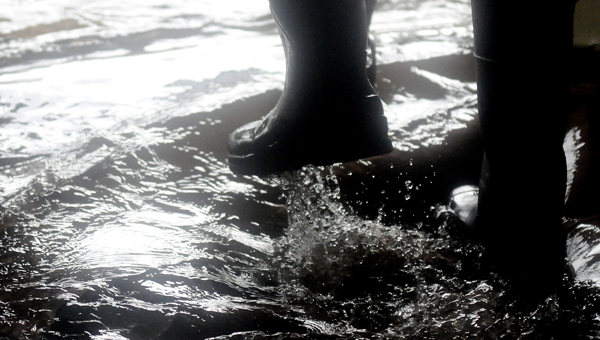 At its worst Monday night, more than 8,000 residents were without power, left in the dark. As the sun allegedly rose Tuesday — although it was hard to see behind the thick blanket of storm clouds — residents began to get a glimpse of an area dealing with a series of minor damage, downed trees and a barrage of flash flooding most had never seen.

“This is the worst I have ever seen it,” Selma Mayor George Evans.

“I’ve been with the department for 24 years and I have never seen flash flooding like this within our city,” Selma Fire Department chief Mike Stokes said. “I mean we got torrential downfall in such a short period of time.”

Even meteorologists with the National Weather Service in Birmingham spent most of the day Tuesday trying to grasp the amount of rain that fell upon Dallas County Monday night and into Tuesday.

“We are not going to have rainfall totals until at least [Wednesday],” meteorologist Jody Aaron said. “But, we have had reports of 9.64 inches of rain that started [Monday] after 5 p.m. up until this afternoon.”

Tommy Burns, the golf pro at the Selma Country Club, reported widespread flooding of the golf course Tuesday morning, saying he had recorded more than 10 inches of rain. In an email to members, he hoped to have the course back open for play Wednesday afternoon.

But while city and weather officials worked to get a grasp on what had hit the area, Anderson Lake and his friends and family began removing water from their home on J.L. Chestnut Boulevard.

Lake said there was no water in his house when he woke up Tuesday morning, but as the rain kept falling, the water began to creep under his front door and into his home.

“The water is about two or three feet deep now,” Lake said as he sloshed through his living room. “The backyard is even worse.”

Lake lives with his sister, Betty Tyler, who was on her way with a water pump to try and salvage the home.

Solomon Hunter of Selma said he stopped when he saw Lake digging trenches and trying to get water out of his home.

“I just stopped and tried to help because I saw him digging out here,” Hunter said. “I know he’s too old to try and clean all this up.”

“See all that back there?” Lake said, motioning out his back door to the area consumed with water. “That’s my backyard.”

A few months earlier, Lake said there was a fire in his home, damaging his walls and ceiling—“first there was fire, now there’s rain.”

Since the majority of Lake’s home was under water, he said he wasn’t sure where he would spend the night.

“I may go over and stay in a motel tonight,” Lake said. “I don’t know about the neighbors. I don’t know where they’re going to stay.”

Other homeowners in Selma also saw water in their homes, and some began calling 911, reporting they were trapped.

“In some cases, we even brought a few residents to the fire stations until they could reach friends or family members.”

The rains and resulting flash flooding did not just pose a concern to homeowners. Those driving Selma’s streets also experienced problems throughout Tuesday morning.

Carl White honestly didn’t see it coming. He turned on to Lauderdale Street, not knowing the deep pools of water that was just before him. That was until his Dodge Neon came to a stall next to the First Presbyterian Church in downtown Selma, water up to the door handles.

“I just didn’t see it,” White said. “I was going along, then I hit the water and tried to make it to the driveway to the church to turn in. That’s when the car came to a stop. It wouldn’t go.”

Students Loveless Alexander, left, and Nathaniel Acoff look over a tree that fell at the corner of Furniss Avenue and... read more