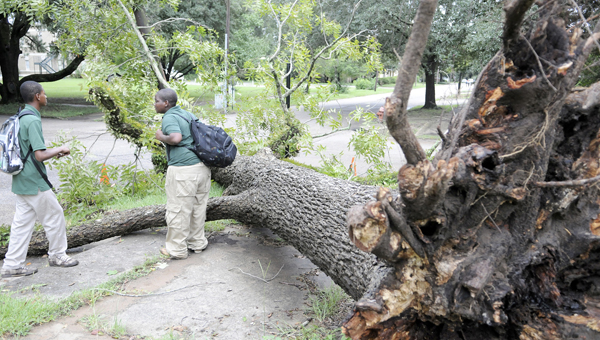 Students Loveless Alexander, left, and Nathaniel Acoff look over a tree that fell at the corner of Furniss Avenue and Mabry Street during heavy storms that ripped through the area Monday evening and Tuesday. -- Sarah Cook

Teachers, staff and administrators at Brantley Elementary knew today would be a little bit of a struggle dealing with the weather. But up until the time water began making its way into the building, they had no idea how much of struggle they’d have to deal with.

Two classrooms in the left wing of the building and the library saw the most water damage, Strong said. Several books and other classroom materials were destroyed.

“Maintenance came in and dug trenches around the school and so we’re hoping and we’re praying that the water will stop,” Strong said at about 11:30 a.m. Tuesday.

Strong said when they realized the water was rising; school administrators immediately evacuated the children to higher ground.

“We got them out in such a hurry this morning once we started to see that the water was coming in,” Strong said. “They all just had a look of disbelief on their faces, they just did not believe this was happening.”

Maintenance workers dug trenches around the school, trying to ward off any more water.

“We’re all working really hard to make sure we can get as much water up as we can,” Strong said. Several pumps were also brought in to alleviate some of the water damage in the library.

Although Brantley did not close its doors and send children home, several other schools did, including Wallace Community College.

Desiree Taylor, director of communications and public relations for Concordia, said about 70 students were evacuated from East campus.

Evacuees will be staying at local motels while the college tries to repair water damage, Taylor said. As for other areas of the school, damage is still being evaluated.

“The amount of damage cannot be determined at this point as professionals are still addressing the situation,” said Rev. Dr. Tilahun Mendedo, president of Concordia College.