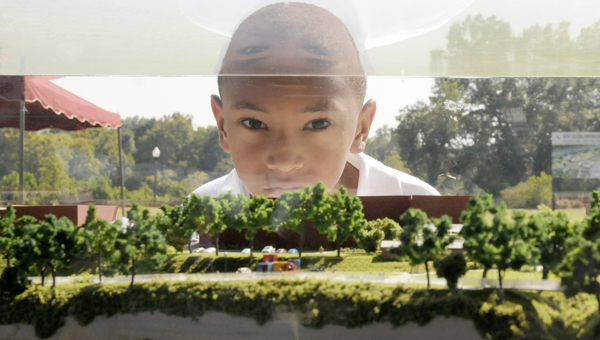 William Bryant, age 5, gazes into a 3-D model of the completed Riverfront project before the groundbreaking ceremony of the Roverfront Amphitheater that will one day seat 600. -- Ashley Johnson

Selma broke ground on the next phase of the Riverfront Park, running along Water Avenue, or as Mayor George Evans refers to it as — Selma’s ticket to tourism.

State Rep. Darrio Melton and others, like David Bowlie from the Alabama Department of Transportation, all spoke of the possibilities this project would create for the future.

“There is strength and opportunity and economics flowing past us right now,” Jim Felder, the executive director for the Alabama Scenic River trail said about the river. “Selma is one of many Alabama towns that grew up along the river facing them but who have turned their backs toward the river and faced toward other things and later times, and with our backs to the river few people noticed to see its decline.”

But he said Selma is a shining example of a community that has taken a second look at its own founding blood.

And city officials have worked to create tourism and development around Selma’s founding blood, the Alabama River. The Riverfront walking trail was one of the first phases of this project, with the amphitheater to come next. In the future, Evans said he expects there to be more things in the riverfront area, even possibly an aquarium someday.

“This field in a year or two is going to be full of different projects with different things going on,” Evans said. “I encourage all of you to stay focus and stay prayerful and I am convinced that at the end of the day we will be rewarded and that will make everyone proud to be a native and a citizen of Selma, Alabama.”

In keeping with tradition, members of the Selma City Council turned a mound of dirt with golden shovels.

The amphitheater is planned to seat 600 people and is to be built into the historic warehouse that currently sits on the riverfront.

Evans said the project is a “dream more than 20 years old.”

Contractors for the project, Frasier and Ousley, plan to officially start construction on Friday, Aug. 24.