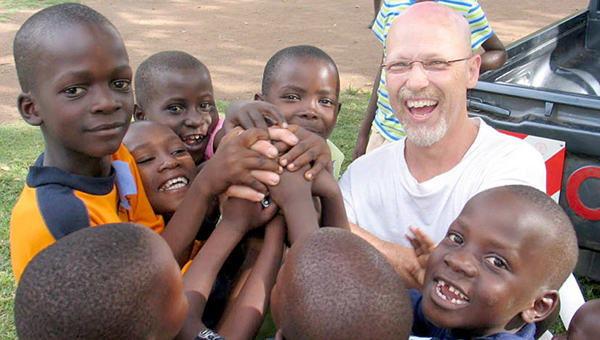 Many missionaries return to the United States from Kenya each year, often describing the country as a place where time has forgotten. But Steve James hasn’t forgotten Kenya. In fact, he’s dedicated his life to it.

He’s opened a clinic that has provided care to more than 15,000 patients, started an orphanage that houses more than 100 orphans, piped fresh water to scorched villages, opened two schools and has blueprints for much more.

But he hasn’t always desired to dedicate so much to an area he now loves.

After seeing a Christian Children’s Fund commercial in 1998, James’ 16-year-old daughter, Brittney, decided she wanted to pledge $24 each month to a young Kenyan boy named Newton.

For three years, she made monthly payments to Newton. James said she aspired to one day make a trip to Kenya to meet him.

“When we lost Brittney, it was put into my heart that I was going to go meet this boy,” James said. “Our lives were broken and just wrecked, so somebody told me I should do something that Brittney wanted to do.”

Six months later, James was off to Kenya. He wanted to find Newton. He had to.

But just prior to his departure date, he added another item to his to-do list. He contacted a hospital in Migori, Kenya asking if they needed his help. They did. So James, wanting to help as much as he could, collected a pallet full of supplies and equipment, spent $2,000 to fly it across the Atlantic, then flew to Kenya himself.

When he arrived, what he saw was worse than what he’d imagined.

“I was totally blown away,” James said of his initial reaction to the area. “I was not prepared for the amount of suffering and heartache that I saw. I instantly knew that something needed to be different in my life because I had so much.”

So when James returned to the U.S., he showed the pictures he’d taken and spoke to anyone who would listen. He knew he needed to get the word out. He knew he could help.

Before long, he’d raised more than $20,000 and was able to start a nonprofit organization.

Now in its tenth year, Kenya Relief is gaining nationwide support. Groups from Detroit, Louisville and elsewhere have all helped James, and he’s filled 24 40-foot containers with supplies and medicine to take to Kenya since the organization’s inception.

Eleven groups, made up of either teachers, construction workers, doctors and more, went to James’ 60-acre complex in Kenya to volunteer last year. James has already planned to make 20 trips in 2013.

But Kenya Relief’s need is greater than ever.

James has almost completed a 240-seat public school, and plans are in the works for a roughly $2 million hospital, although no money has been raised for it yet.

“I know what excellence is,” James said. “My kids went to good schools and I’ve worked in some very good hospitals. That’s what I want to bring to Kenya.”

James makes himself available to speak at church’s and civic groups, and sends newsletters to all those interested in helping. More information is available at kenyarelief.org, by calling James on his cell phone, 256-507-0217, or by emailing him at sjames@kenyarelief.org.

“Everybody needs a Steve James in life,” Paula Stewart, who accompanied James on his most recent trip, said. “He totally pours himself into everything he does. If everybody could just get involved and do a little bit, everything would be multiplied. We could help them so much.”