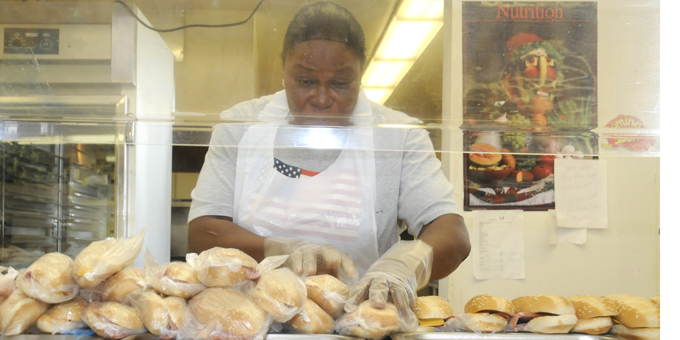 A worker with The Summer Feed Program prepares meals for local children in Dallas County. The program has several sites and the site at Tipton Middle School is the largest, packaging 80 free meals for children in the community daily. The program also provides exercise outlets for the children. -- Ashley Johnson

For many children in neighborhoods across Dallas County, a healthy lunch all summer long is just several blocks away from their home, and most importantly it’s free.
The Summer Feed Program has provided them with a healthy meal every weekday, and at several feed locations the children are now getting exercise.
The largest program site is the one operating at Tipton Middle School in Selma. The site sees 75 to 80 children come for recreation and lunch on a daily basis.
The site has grown so much and there is such a big demand, the county extended the program’s hours and put in more funding at the site. This way, the children could stay longer and more children could eat for free.
Chester Anderson, who lives in that neighborhood, works with the program and supervises the recreation everyday.
“The most important thing is that this gives the kids something to do,” Anderson said. “Because I live here in the neighborhood and I can tell you that we really don’t have that much to do or activities going on in.”
Anderson opens up the gym at Tipton daily. He said the kids are waiting for him to unlock the doors as early as 8 a.m.
“They come in and then stay here until 2:30 p.m. and they will play all day if you let them,” Anderson said. “If I didn’t close the door at 3 p.m., they wouldn’t go home.”
The program provides a place for children to go while their parents are working throughout the day, and Anderson said that keeps them out of trouble. He said their parents also feel at ease about the kids being in his care because he not only works with the school, but also has been a resident for more than 40 years.
The Summer Feed Program also brings in Daniel Sullen, a 4-H agent for Auburn Extension Service. Sullen said enriches the children in the program through exercise and activities. He teaches the students new physical activities through the Just Move! Initiative.
“We try to introduce them to exercises that they aren’t normally used to,” Sullen said. “A lot of kids just do basketball so we will do relays and learn how to do things like throw frisbees. A lot of the kids don’t know how to do that.”
He wants to show the children in the program that getting up and moving is better than sitting and playing video games all day. He also said he wants to leave a lasting impact on their lives.
“The biggest thing is that I don’t realize how much of an impact I make on the kids until I come out here and then come back another week and I see them playing a game I taught them,” Sullen said. “Like right now I see the kids over there that are playing the Hot Shot game I taught them last week.”
Anderson and Sullen both said they want to provide an organized outlet for the children and want it to teach them something, as well as improve their quality of life.
“Normally, with the neighborhood here, it seems to be that the only things reported or told are the bad things and never the good things,” Anderson said. “And as far as this program goes, we want people to be able to see we have positive things here.”

On Thursday July 26 at the Old Cahawba Archeological Park, children from the community will blaze down a new bike... read more