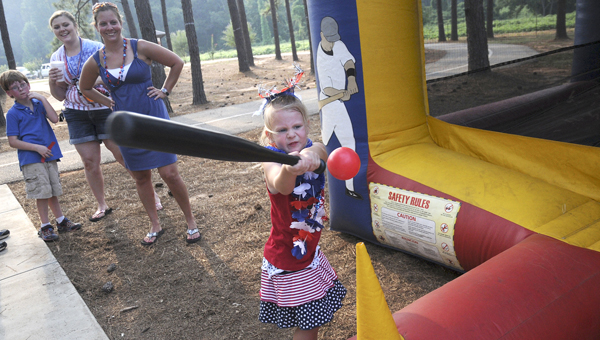 It’s not often those sitting atop the pedestal in a dunking booth are begging for the ball to find its target. Such was the case Saturday afternoon as temperatures in excess of 100 degrees settled upon those attending the annual Valley Grande Independence Celebration.

Those “volunteering” for the dunking booth, which was just one of many vendors and games available, were the members of the Dallas County High School varsity football team and their coaches. They, along with area churches and other organizations, set up booths, games and attractions that went to entertain the hundreds who attended the event.

“It really is something that, even with the heat the way it is, we have had so many people come out,” Valley Grande Mayor Tom Lee said. “And, it’ll only get better as the day wears on and the temperatures go down.”

The event — which was celebrating its fourth anniversary — has become a project Lee hopes continues and grows.

“It gets better every year. We add more every year. This is basically like an old time country carnival,” Lee said. “This is one thing that defines a community so I am obviously hoping that whoever comes in, looks back and realize it’s like losing an arm when you step away from this kind of activity. Look at the number of kids out here. It’s amazing.”

As for the heat, it didn’t deter many from attending, and it did not prevent vendors and games from going at full speed.

“We’ve had one real bad celebration where we had a thunderstorm roll through and basically it ended the day part of the celebration early; it blew through and we were still able to do the fireworks,” Lee said. “It didn’t ruin anything, it just dampened everything a little.”

As they have done with previous Independence Celebrations, the city will divide up vendor and game ticket revenues among the participating churches and organizations who helped man events and volunteer.

“This has really become a win-win event for the city and these groups,” Lee said. “This is a quality fundraiser for these folks.”

As for the other component of the weekend event, the second annual Valley Grande Rib Cook-Off, the winner proved to be a repeat, but the turnout proved to be double that of last year.

“Went to eight folks, half of them brand new, half of them repeats,” Lee said of the cook-off field. “We mixed the judges up from last year and had some real powerhouse judges; real men.”

The winner was Frank Lynch, who won the 2011 event, followed by Diane Dempsey in second and Anthony Draime in third.

“Every time you put on something like this, you run the risk of one judge liking vinegar base, another judge liking a sugar, brown sugar base,” Lee said. “You know it all depends. But, the winning rib will definitely be a tender and tasty rib.”

Lee has announced plans to not run for re-election as Valley Grande mayor, but hopes whoever does replace him continues the work on this annual event.

“I think it would be sad for someone to let this go, even if it is a lot of hard work.” Lee said.