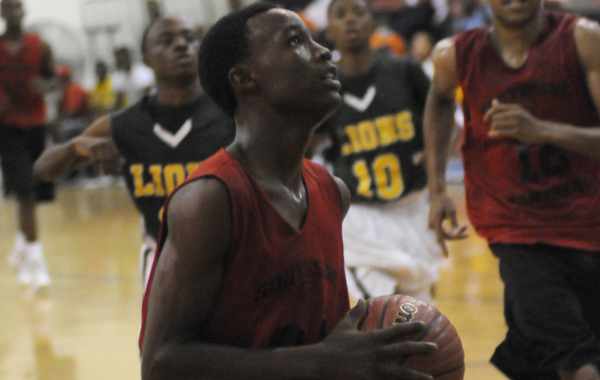 Southside’s Jevon Hall attempts a layup during a game against Central-Hayneville. Southside hosted a play date on Thursday, as a total of six teams from throughout the Black Belt competed in scrimmage games. -- Robert Hudson

With each team scrimmaging for three games, it was a chance to gain experience and improve.

Southside head basketball coach Cedric Brown said he was overall impressed with the Panthers in their continued push to the fall.

“The first two games, we played real hard — I guess it was like we wanted to defend home — but that last game we just kind of relaxed. But I explained to them that we’ve got to play hard each and every game,” Brown said. “Each and every individual’s got to put it on the line each and every game. But overall I was proud of them and they played real well. We’re coming along, we’ve got a lot of young guys filling big roles, so they’re filling the shoes well right now. This right here is about everybody getting better.”

Selma Saints head basketball coach Woodie Jackson said this was the second play date of the week for his team, and the improvement is noticeable.

“From the last time at Keith, we’ve seen a lot of improvement,” Jackson said. “Defensively, we went back to practice and worked on a lot of fundamentals. Offensive side, we passed the ball better, we’re moving better without the ball. We still got to continue to work hard, and we tell them everyday to come and work hard, have a willing mind to work. For the summer, we’re just trying to work to get better for the fall.”

Keith Bears head basketball coach Tommy Tisdale praised the leadership of senior Rodney Ellis and the hustle of Costella Hayes, and while some of his players that also play football weren’t available as they were attending a football camp, he said it actually gave his younger players a chance to gain more experience.

“We’re learning on the go with some new guys. I had two or three of my core older guys and they helped them along,” Tisdale said. “My football players have gone off to football camp, and it actually turned out to be a blessing in disguise because my young guys got to play all game for three games, and they showed a lot of promise today.”

Francis Marion head basketball coach Johnny McCalpine said his team continues to gain valuable experience with each play date it attends, and it’s just a positive thing for the players.

“It’s giving us a chance to play against top notch competition and it’s a wonderful experience for the kids,” McCalpine said. “This is our third play date and I think that we’ve gotten a whole lot better since the first one. It’s a wonderful thing to have going on.”

Toriano Baker, head boys basketball coach of Central-Hayneville, said not only did this play date give the Lions a chance to play in a game situation, it’s helping them grow as a team.

“I thought we did well today. It gives us time to work on meshing together as a team, working on team unity and other things we want to get better in,” Baker said. “We’re really trying to work on fundamentals, and Southside really does a good job of playing you hard and they were a good test today because it allowed us to get a game-type atmosphere.”

Dallas County’s Xavier Knight (4) tries to fight for extra yardage during spring practices. The Hornets will be led by... read more