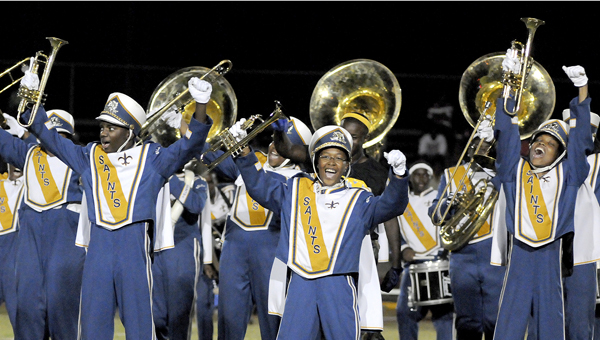 The Selma High School Marching Saints perform during halftime of the opening game of the 2011 football season against Southside. -- Tim Reeves

The Selma High School Marching Saints are preparing to offer a great evening out for the community in exchange for a little help in return.

The Marching Saints will host their first Jazzy Jazz Summer Extravaganza and “Adopt A Uniform” on July 10 at 7 p.m. in the Carl C. Morgan Convention Center.

The event is the first major push by the school’s band program to raise money for new uniforms.

“We’re in dire need of new band uniforms,” said Brandon Williams, band director of the Selma High School Marching Saints. “The students have been doing great performances all over the state of Alabama and the country, and they always get applauded on how they look and the way they perform and how well they march. But if you look carefully at the uniforms, you’ll see we need new uniforms. We’ve had these previous uniforms that we have now for the past 10 years and a whole lot of wear and tear has gone through them.”

Individual tickets for the event are $15, while table sponsorships are available as well.

Williams said the goal is to raise enough money for about 100 new uniforms.

“We’re going to do a plethora of different fundraisers to raise money for the program,” Williams said. “Each uniform — one uniform — cost $500. With the number of students I have, I’m trying to raise enough money to get at least 100 uniforms. So, of course, $500 times 100 is $50,000. So, that’s the amount of money that we’re trying to raise.”

Williams said the festival will have live music, including performances from musical group Impromptu and the Selma High School Jazz Band.

Williams added the program will also give the community a chance to see what the students are capable of.

Organizers for the first annual Community Resources Day hoped the event would highlight services available to residents throughout the community,... read more