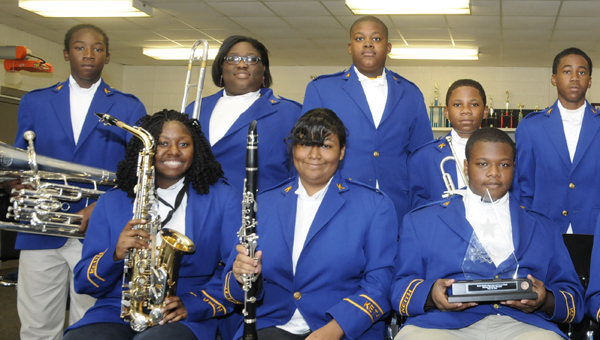 Keith High School band members (not all are pictured here) participated in the Southern Star Music Festival earlier this month in Georgia. The festival gave the band a chance to perform several concert band selections in front of experienced band directors, and Keith received a trophy for their participation. -- Robert Hudson

The Keith High School band took its talents out of state for a competition that will help it sharpen its skills.

“Keith participated in the Southern Star Music Festival on May 11,” Rackley said. “This is where our group prepared several concert band selections and we were judged by a panel of experienced band directors.”

Rackley said the band participated in front of judges and were given praise, as well as tips that will help them improve, and it received a trophy.

“The distinguished panel listened and made comments about the performance that the band did,” Rackley said. “We were able to review those comments in order to help improve our sound and technique. The judges gave praise in areas where we did well, and constructive criticism where we needed improvement.”

Rackley said participating in competitions keeps the students practicing, and in turn makes them better musicians.

“The obvious thing is, as long as we have a performance to prepare for, it kind of keeps the pressure on the students,” Rackley said. “Every time we get ready to go to a competition, it takes a careful type of preparation. We have section rehearsals, break down sections of music so that it is fine tuned, so that when we do go to competitions the judges will be pleased with the work that we’ve done.”

Rackley added it’s important that the band keeps performing in competitions like this one, as it will help them improve.

“The students got an opportunity to perform for an unbiased audience, which made the atmosphere authentic,” Rackley said. “This is the start of a tradition that we want to keep going. Concert band is the core of any good band program, so we’re really trying to base our band program off of having a good concert band. These are the very experiences that shape these students into great musicians.”