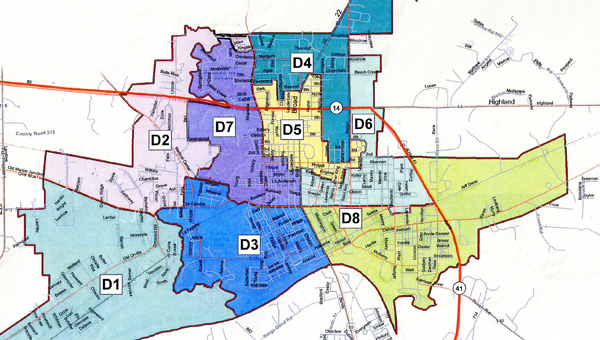 The new map, outlining the new wards within the city limits, along with the rest of the redistricting paperwork has been completed and sent to the U.S. Justice Department for their final approval. These will be the new voting districts for the Aug. 28 municipal elections.

The paperwork — for the most part — is done. Today, the descriptions and map are published. All that’s left now is a blessing from the Justice Department and a whole lot of work on the part of city election officials and the Dallas County Board of Registrars.

The city of Selma completed the redistricting application Friday, sending the package off to the Justice Department for their approval, and was scheduled to deliver descriptions of the new voting wards to the Registrars.

It is there where the bulk of the work remains as they are now charged with making changes to the voting records of a large amount of registered voters.

In a review of the population changes to each of the wards, approved by the Selma City Council, more than 2,300 residents were switched from one ward to another.

“They have two months or so to get everything in the system and changed,” Selma City Attorney Jimmy Nunn said Friday. “The absentees for the municipal election are not mailed out until July 24.”

In addition to the work by the Registrars, Nunn said some council members have talked about doing their own notifications to residents, trying hard to reduce any confusion on where registered voters will cast their ballots in Aug. 28’s municipal election.

“We will have to be prepared for more questions, more confusion on election day than in years past, but it is something that we have dealt with before,” Nunn said. “That’s why it is important that residents read through the legal descriptions published in the newspaper, look at the map that is published and find out early on if their area has been affected or not.”

While every ward saw population shifts in redistricting, a process that is required by law every ten years to reflect population changes published in the Census, some wards saw significant changes.

Ward 4, represented by Angela Benjamin, was the most impacted by redistricting. Her district had to “give up” 672 residents in order to comply with the law that requires each district be equal in the number of residents. The law does allow for a 5 percent deviation, plus or minus, giving city leaders a little flexibility.

Ward 6, represented by B.L. Tucker, was the second most affected ward, bringing in nearly 500 new residents. Before redistricting, Ward 6 had 1,985 residents. After the redistricting process, Tucker now represents a ward of 2,471.

Selma’s historic Ward 3, represented by Greg Bjelke, took in 249 voters in the redistricting process. Ward 5, represented by Sam Randolph, had to bring in 285 voters, while Bennie Ruth Crenshaw’s Ward 7 took in 163.

The ward that had the least amount of change was Ward 8, represented by Corey Bowie. Overall, Ward 8 gave up 66 residents.

Even though the city must eventually wait for Justice Department approval, election plans are well under way. The final day to meet residential requirements — meaning you have to be a resident before a set date — is May 30.

Qualifying for candidates will begin July 3 and end July 17.