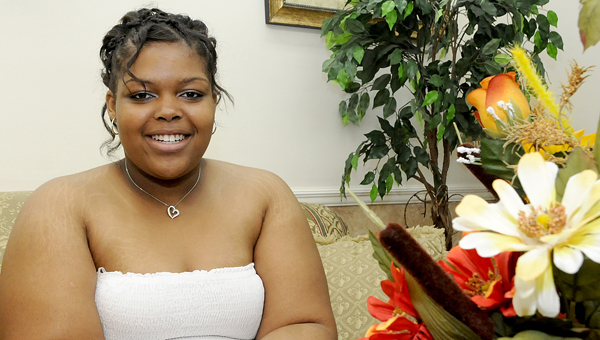 Ellwood Christian Academy senior Kenyata Watts was named the school’s valedictorian last week. Watts is graduating with a 4.0 GPA and plans to attend the University of Alabama in the fall.

Editor’s note: This is the third in a series of articles spotlighting the valedictorians from each of the schools in Dallas County.

Math has always come easy to Ellwood Christian Academy senior Kenyata Watts, who hopes to one day be an accountant for her own business.

“I love math and I like money, so it works out,” she said. “I’ve always liked math. Ever since I was younger, it was always my strongest subject and highest grade.”

Watts, who will graduate from Ellwood with a 4.0 GPA next week, was named the school’s valedictorian earlier this month. She plans to attend the University of Alabama and major in accounting in the fall.

She said her time at Ellwood has taught her how to be an example and to set her standards high, something she plans to take with her to Tuscaloosa.

“I’m kind of scared about college because I don’t really know anybody,” Watts said. “I’ve got to meet new people and make new friends. But in a way, I think I’m looking forward to it.”

May has admittedly been a tough month for Watts, as she is preparing to not only graduate from Ellwood, but also move away from Selma for the first time in her life.

“It’s going to be hard to leave all of my friends and family,” she said. “I was getting all emotional the other day thinking about graduation. I don’t think I’m ready to graduate. It’ll be good though. I’m excited.”

Throughout her time in high school, Watts played for Ellwood’s softball team and was also a member of the National Honors Society and Student Government Association. She was a nominee for Girl of the Year, volunteered with Sav-A-Life, Inc. and Integrity Worldwide, helped to coach a little league softball team and helped with the Special Olympics.

She said she was attracted to UA because of the ability to meet new people, something she’s looking forward to doing in mid-August.

“It’s a completely different experience,” Watts said. “I’ll be on my own, but I’m looking forward to just growing up and experiencing life.”