McNeil wants to come back home to help residents 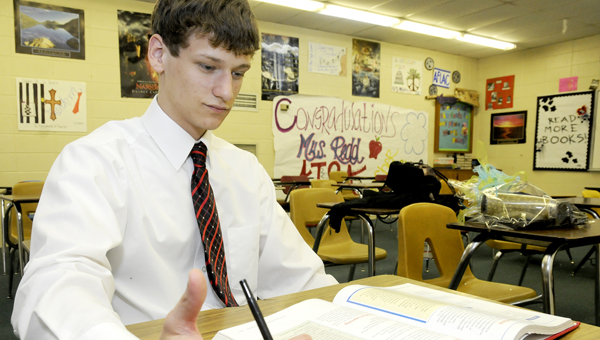 Editor’s note: This is the first in a series of articles spotlighting the valedictorians from each of the schools in Dallas County.

Although Meadowview Christian School senior Taylor McNeil hopes to attend either the University of South Alabama or Auburn University Montgomery to complete his bachelor’s degree, he aspires to one day return to Selma to open his own physical training facility to help area athletes.

McNeil, who plans to major in business management and minor in physical training, will graduate from Meadowview Christian with a 4.0 GPA, and was consequently named the school’s valedictorian earlier this month.

“I think opening a physical training or sports facility would really help Selma athletes either be better to match their level in high school, or to prepare them for the college level,” McNeil said. “I think that would help Selma get better recognized than just for what happened in the past.”

Come the fall term, McNeil will attend Wallace Community College-Selma to complete his core classes before transferring to either South Alabama or AUM.

McNeil played guard for Meadowview Christian’s junior varsity and varsity basketball teams during his time there and also participated in the school’s junior and senior BETA clubs, ACE competition, scholar’s bowl, publications and math team. He said he hopes to play for Wallace’s basketball team during his freshman and sophomore years.

After moving to Selma before the start of his sixth grade year, McNeil said he quickly acclimated to his surroundings and is proud to call the city his home.

“I’m most going to miss all the people that I’ve gotten to know here, especially the teachers,” McNeil said. “When I moved here I was a stranger to everyone, but now that I’m leaving, it feels like I’m leaving my family, not just my family at home but my family at Meadowview Christian too.”

McNeil, who enjoys fishing, driving his motorcycle and reading in his free time, said he was most excited to see what life in college would be like.

The funeral arrangements for 17-year-old Je’Terius T. Moore are incomplete, as is the investigation into the officer-related shooting that lead... read more