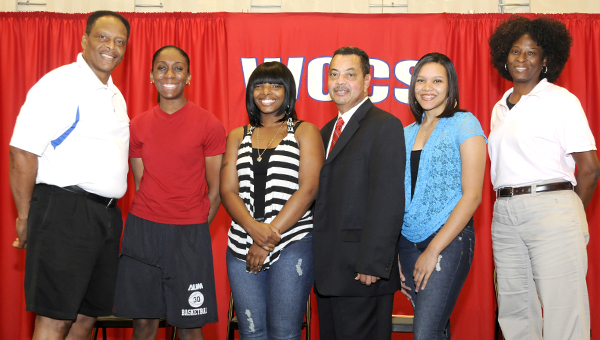 Grimes, a Selma native, has committed to play for the University of Alabama-Birmingham, and Dean, of Tyler, will go to Huntingdon College.

Coleman and King, both from Birmingham, each signed scholarships to continue their playing careers at Miles College in Birmingham.

Dr. James Mitchell, president of Wallace Community College-Selma, said the achievements of those students shows their, and Wallace’s, commitment to excellence.

“I think it says that we are more than just having students come here as athletes,” Mitchell said. “They’re student-athletes because these young students here, not only did they excel athletically, but they excelled academically, and that, to me, is being very successful and meeting the goals and objectives of this college.”

Grimes, who led the Lady Patriots in scoring with 23 points per game from her point guard position, said she’s excited to continue her career.

“It just feels great. I mean, I worked for it, they trained us here and got me ready to go on to the next level,” Grimes said. “It’s a good feeling.”

Dean, who was the Lady Patriots’ leading rebounder with 8.8 boards per game, is looking forward to continuing the pursuit of her degree.

“It’s just a great opportunity and I feel great,” Dean said. “I hope to become a physical therapist and go to grad school.”

“It’s a great opportunity because I get to pursue my education and still be able to play volleyball,” Coleman said.

King said she’s happy to still be able to play the sport she loves.

“It’s great. As long as I’m still playing volleyball, playing the sport that I love, I enjoy it,” King said. “It feels good.”