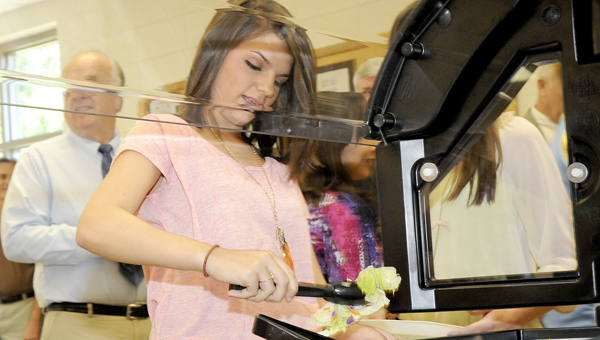 Martin Middle School student Evynn Wilson prepares a salad at the school’s new salad bar donated by HBO and the Whole Kids Foundation. Martin Middle School was one of the first schools in the country to receive the salad bar as a part of HBO’s The Weight of the Nation documentary series that aims to raise awareness about obesity. -- Robert Hudson

Martin Middle School was one of the first schools in the nation to participate in an initiative that puts it on the front lines in the fight against obesity.

As a part of cable-television network HBO’s The Weight of the Nation documentary series and in collaboration with Whole Kids Foundation and GLOBALTAP, Martin Middle School in Valley Grande was one of just a few schools in the U.S. Tuesday to kick off a campaign to implement 100 salad bars and water taps in schools across the nation.

Students and public officials from Selma and Dallas County gathered in the school’s cafeteria, as Martin Middle School was donated a full salad bar from HBO and a new tap water fountain donated by GLOBALTAP in order to provide healthier food options for children and raise awareness about obesity.

Dr. Fannie Major-McKenzie, superintendent of Dallas County Schools, said it’s an opportunity for the school system to help combat the issue of obesity.

“This is very significant for us. It’s another opportunity to drive home the issue of obesity and of health problems we have as a result of obesity,” McKenzie said. “This is very concrete because HBO, Whole Kids Foundation and GLOBALTAP are providing tangible resources to assist us in this endeavor.”

The Weight of the Nation is a mulit-part documentary series put together by HBO that will air May 14 and 15 at 8 p.m. ET on the network, and aims to outline the issues with obesity.

As a part of that documentary, HBO is helping to implement salad bars at schools all over the nation.

Selma Mayor George Evans said “it was a historical day” for the county to be selected as one of the nation’s first to be a part of the initiative, and Martin Middle School principal Michael Blair agreed.

“I think Mayor Evans said it right — it’s a historical day. For there to be only ten schools in the United States going through this today, and one is in the Dallas County School System, I think it speaks volumes for what can happen,” Blair said. “If we can encourage our kids to eat healthy, do the things that will increase their lifespan, it’ll help them have a healthy life. I think it’s just a great day for us. For HBO to support us, Whole Kids, GLOBALTAP and for the money they have spent and have committed to not just helping our nation, but to the Dallas County area, I think that speaks volumes.”

HBO isn’t stopping at Martin Middle School with it’s efforts in Dallas County, as the network and its partners have also pledged to install eight salad bars in the Dallas County School District by Sept. 2012.

McKenzie said all of the salad bars and resources provided will help schools keep their children healthy.

“I think it will be very beneficial because we will be providing additional, nutritional foods, such as vegetables, fruits and what have you,” McKenzie said. “We will be providing water, as opposed to some of the other drinks that we could possibly serve. So in the aggregate, I think this will reduce the number of calories and sugars students consume during the course of the day.”

Cancer survivors take to the track at Memorial Stadium Friday evening for the opening lap of the 2012 Dallas County... read more