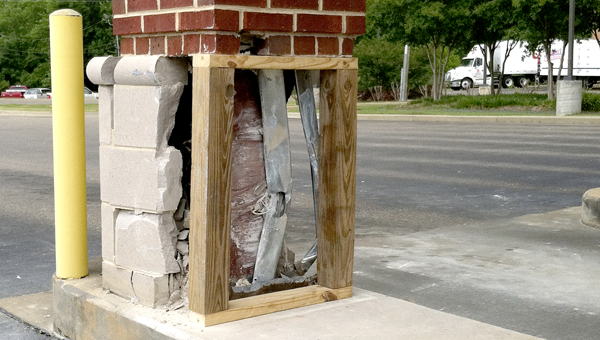 A car driven by Natavious Fields, 26, collided with one of the brick columns in the drive-thru area of the Regions Bank location on Citizens Parkway early Friday morning. Fields, who was shot at the gas station across the street from the bank, was in his car when it collided with the column. He suffered a fatal gunshot wound to the chest and was declared dead at the scene. -- Tim Reeves

An alleged drug deal at a main service station in Selma went terribly wrong early Friday morning when one of those reportedly involved was shot in the chest and killed.

Shortly before 3 a.m. Friday, a shooting at the Pure Station at the corner of Broad Street and Citizens Parkway was reportedly connected to an attempted drug transaction involving three individuals.

The victim, 26-year-old Natavious Fields, pulled up to one of the station’s pumps where two individuals, who police have now identified as 18-year-old Joseph Junior Agee III and 19-year-old Marquel K. Woods, approached him.

“When they approached the car, it appears that one of them pulled out a small caliber handgun, demanded the drugs and the cash. When the victim refused, one of the suspects opened fire,” Selma Chief of Police William T. Riley said. “Through the investigation, we have learned that Agee was the suspect who fired the shots.”

Fields, who was still in his car, a grey Nissan Altima, attempted to get away after being wounded. Somehow, the accelerator was pressed, sending his car out of the parking lot, across Citizens Parkway, up onto the grass area on the opposite side of the street before coming to a stop after colliding with one of the brick columns at Region’s Bank.

Riley said once officers arrived, they found Fields in his car with a gunshot wound to the upper torso.

Following the shooting, both Agee and Woods fled the scene, but not before leaving behind evidence that included witnesses and video surveillance.

“We were able to get good visible identification of the two suspects from video surveillance at the store, including video of them inside the store,” Riley said. “We also received information from concerned citizens in the area.”

Police, with the identities of the suspects in hand, were able to take both Agee and Woods into custody later Friday morning.

As for Field’s vehicle, Riley said investigators did find marijuana when they executed a search of the car.

Morgan Academy's Sarah Fraiser finishes ahead of her opponents during the finals of the girls 100 meter dash Thursday afternoon.... read more