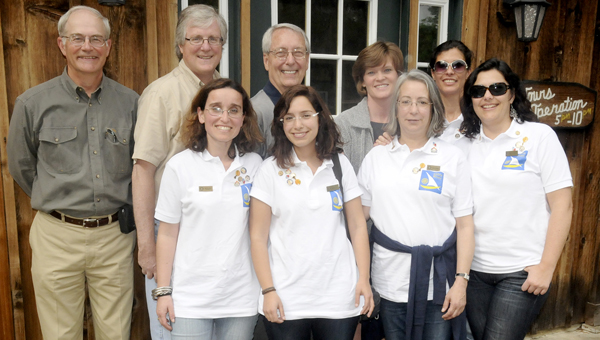 The next time a few area residents open a bottle of wine and smell the bottle’s cork, they may take a moment to think about someone they have recently met.

Maria Paula Cortes Tavares is a cork farmer from the east coast of Portugal and was a recent visitor to Selma, leading a group that was touring portions of south Alabama as part of a Rotary International exchange.

“Throughout the tour, we have found warm people with friendship and kindness,” Tavares said as she was welcomed by a group of Selma Rotarians last Wednesday in front of Tally-Ho Restaurant. “We have been delighted so far and have had a fantastic time.”

Tavares and her group, which included four other Portuguese women, are from Rotary District 1960 in Portugal. They have been touring portions of the state since arriving on April 7.

Their trip includes visits to Montgomery, Auburn, Demopolis, Gulf Shores, Mobile, Clanton and Selma, among others.

The Selma Rotary Club, led by club president John Nettles, played host to the five women and organized a series of tours for them during their two-day stay.

“This group is in the country for roughly four weeks,” Nettles said. “They go from club to club to get to know the culture of the area as well as customized, personalized tours of something in the area that matches their vocation.”

As for Tavares, she was treated to a customized tour of the area’s forestry industry, while others toured local medical facilities and governmental offices.

“This is a cultural and vocational exchange sponsored by Rotary International,” Nettles said. “Districts from throughout the world participate.”

Bob Kelley, who is a past club president, has been involved with a number of these exchanges.

“This club has a history of doing these,” Kelley said. “I think this is the tenth one that I have been involved with.”

Kelley listed visits from groups from Sweden, Philippines and Brazil among the ones he has helped.

As a team leader, Kelley led a group to Argentina.

“There is no cost for the team members or the team leader,” Kelley said. “Rotary International and our districts pay for this. It is a great program.”

Following their Selma visit, the group went on to Demopolis.