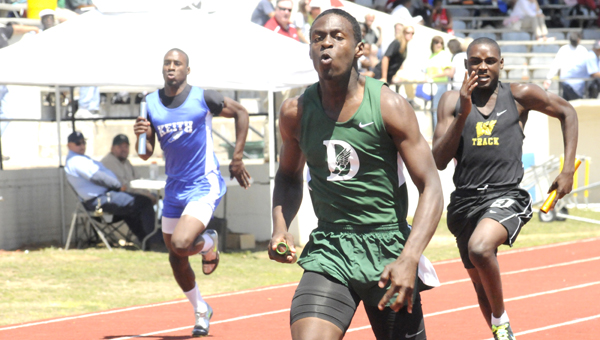 Athletes from around the county and the state were on display Thursday in a first-time event put on by host school Dallas County High School.

“It was the first time for us to ever host a track meet of any kind, especially a meet of this size,” Dolbare said. “We had 18 total teams come and compete, over 460 athletes. I feel like it went very smooth and we were able to get through the events quickly, and everybody seemed happy at the end of the day.”

Dolbare said he’s heard a lot of positive feedback, and he hopes to hold an invitational again next year.

The Hornets finished third overall in the team rankings for girls and fourth overall for the boys team rankings.

Dolbare said his team did a good job on the day.

“I was very pleased with my entire team as a whole. We had 32 athletes to set personal records during the meet,” Dolbare said. “They performed at a very high level all day long. We’re getting ready for sectionals, they’re coming up April 27-28, we have a meet in Demopolis next Thursday, and we’re just looking forward to the end of the season and trying to finish it as strong as possible.”

Tommy Tisdale, track and field coach for Keith High School, said he was pleased with his team’s showing, and the event gave them a chance to run on the track they’ll be racing on when the Class 1A-3A State Track Meet comes to Selma.

“Overall, I think we did pretty well,” Tisdale said. “It think it was as good as any other track event I’ve been to around the state. It’s actually good to have it here in our backyard. It was good for our guys because we’re one of the few teams out of the 18 that participated that is actually going to run our state meet here in Selma. We’re kind of familiar with the track anyway, but it gave us an opportunity to run there before we have to run there for state.”

Selma High School track and field coach Ivery Williams said his team had a strong showing in the running events.

“In the running events, I think my team did real well,” Williams said. “In the field events, we didn’t fair well at all. I had some girls that faired well in their races. They won their individual heat, but overall, they finished third.”

Southside pitcher Mikal Brown delivers a pitch against Wilcox-Central. The Panthers produced on offense and capitalized off the Jaguars’ mistakes... read more