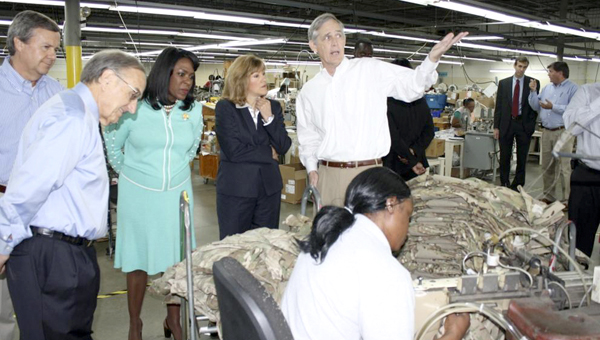 Federal and defense industry officials were in Selma Wednesday, touring a local business’ facility and meeting the people currently manufacturing combat uniforms for those serving in the U.S. military.

U.S. Rep. Terri Sewell was joined by senior procurement executives from the Defense Logistics Agency in meetings with representatives of Selma-based American Apparel.

“I was pleased to welcome the Defense Logistics Agency to the American Apparel factory in Selma,” Sewell said Wednesday in a release. “This was a unique opportunity to showcase American Apparel and the hardworking individuals of 7th Congressional District as shining examples of what businesses can do with the resources and opportunities provided in this district.”

The procurement officials from DLA came to Selma after being invited by Sewell to discuss military procurement contacts with American Apparel officials.

“American Apparel is not only a valued employer in the district, but also a key partner with DLA in helping ensure that our military combat units are prepared and equipped with essential life saving combat uniforms,” Sewell said. “During our visit we were able to establish and engage in a meaningful dialogue about the procurement process and industry needs and concerns. I applaud American Apparel and the Defense Logistics Agency for their commitment to maintaining and strengthening this essential partnership between businesses and the federal government.”

American Apparel leadership said Wednesday they appreciated the chance to meet with the key defense industry executives and the effort put forth by Sewell in organizing the meeting.

“American Apparel is an important member of the Defense industrial base and I was happy to meet with the workers, tour the facility and discuss how DLA does business,” Heimbaugh said. “DLA believes it’s important to stay in touch with the industrial base and some of the ways we do this is by visiting our business partners on a regular basis.”

As a Department of Defense combat support agency, DLA provides the Army, Navy, Air Force, Marine Corps, other federal agencies and joint and allied forces with a variety of logistics, acquisition and technical services.

The agency sources and provides nearly 100 percent of the consumable items America’s military forces need to operate from food, fuel and energy, to uniforms, medical supplies and construction and barrier equipment. DLA also supplies more than 80 percent of the military’s spare parts.

Headquartered at Fort Belvoir, Va., DLA has about 27,000 employees worldwide and supports about 1,900 weapon systems.

“It is my hope that this dialogue with American Apparel and DLA will continue,” Sewell said. “It’s ongoing conversations that allow us to best meet the changing needs of our military combat forces, while continuing to support businesses and industries that are vital to preserving our military uniform industrial base.”

Cookoff pays off for Salvation Army