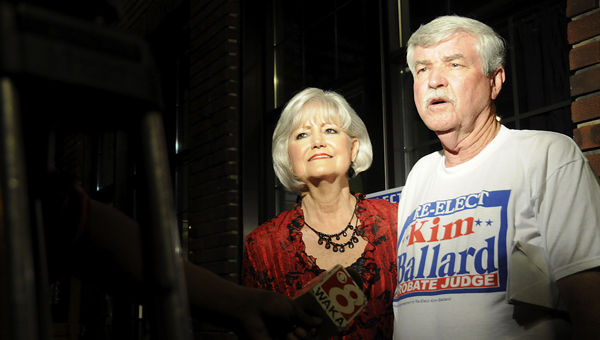 For Ballard, the win earns him another 6-year term, which will be his last.

“It was a pretty convincing win and a humbling win knowing that I have that many supporters in both the black and white communities,” Ballard said. “This is a job that you have to prepare yourself for. It’s a job in my opinion that you can’t just walk in to and start doing it. I’ve been doing what I’ve been doing as commissioner, councilman and probate judge now for 25 years.”

For Williams, Tuesday’s victory shows him what is most important to those who voted for him.

“The thing that I value most is that people recognize that experience counts. I mentioned earlier that anyone who knows anything about medicine, they don’t want a doctor in their first year to operate on you just leaving med school. You don’t want a lawyer to represent you in court, just leaving law school. The same thing should be about the county commission,” Williams said. “They should want a county commissioner who has been there, weathered the storm, who have been with them through thick and thin, up and down.”

For Ballard, his win and Williams’ win, shows him the voters are pleased with the direction of the county and the commission.

“I think the real deciding factor was the public is proud of what the Dallas County Commission and me as chairman and probate judge have done. And you look at the 40 years of friendships that I’ve built — that’s not something that can be penetrated by some pop up politicians,” Ballard said.

In the end, Williams knew who to thank for Tuesday’s lopsided victory.

“My workers were faithful, dedicated and determined. I want to thank everyone that helped me at the polls. Thank the voters who turned out in large numbers and I really appreciate their effort in getting me re-elected,” Williams said.

As for Ballard, who cannot run again because he will turn 70 during this next term, getting re-elected gives him an opportunity to continue moving the county in the direction he and the current commission envision.

“It’s a good feeling — it’s a big challenge — to know that I can continue doing the things that I’ve done for the past six years,” Ballard said. “I know in my heart that this commission and me have done a lot of good things for the people of this county and I think it was proven tonight that people of Dallas County want us to continue.”

In a race that did not go the way of the incumbent, Circuit Court Judge Tommy Jones fell to challenger... read more