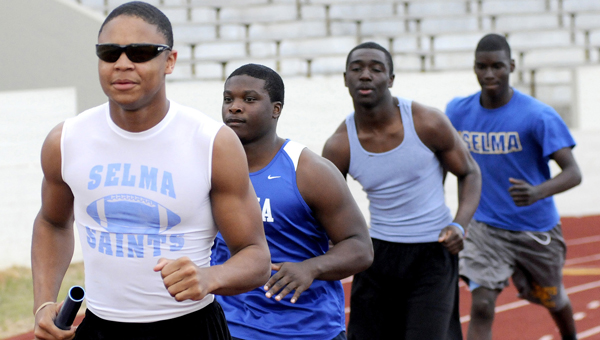 With track and field season on the horizon, a few local schools have already begun the race for a championship.

Ellwood will field its first ever track and field team for boys and girls this season in this its last year as a member of the Alabama Independent Schools Association.

John Glasscock, head boys and girls track and field coach for Ellwood, said the first order of business is to get the team in shape.

“When you start out working with kids that have not run track, you’ve got to work on the basic things,” Glasscock said. “The first thing you’ve got to do is not worry about the field events. You want to concentrate on getting them in shape.”

Glasscock said the team has been preparing for relay and individual events such as the 100-meter dash among others, and the Eagles have also been working on the little things as well.

“We’re trying to get them in shape right now, and we’re working on some of those intricate things like the exchange with the baton on the 4×100 and the 4×200,” Glasscock said. “That’s kind of difficult, so we’ve been working on that.”

Ellwood will also participate in field events such as the shot put and discus throws, long jump, and hurdles.

Glasscock said the athletes are excited about the upcoming season.

Ellwood’s first meet is the Morgan Invitational at Memorial Stadium on March 19 at noon.

The Selma High School Saints travel to Demopolis on Thursday for their first track meet of the season.

Selma’s Devonta Snow and Cory Savage competed at the state level last season, with Snow finishing 9th in the state for the 200 meter last year, and Savage running the 800 meter.

Concordia College is also preparing for the season.

After its first meet of the season at Stillman College was cancelled and its second one in Savannah, Ga. was rained out, Concordia College men’s and women’s track and field coach Timeka Ross is hoping the third time is the charm.

The Hornets men and women will participate in a meet at Birmingham-Southern College on March 9 and 10, with field events at 3 p.m. on Friday and running events on Saturday at 10 a.m.

Ross said the Hornets have 21 men and seven women on this year’s team, and Concordia will participate in relays, individual races and field events, such as the shot put, javelin, discus, high jump and triple jump.

Ross said she’s hoping the Hornets can continue the success they’re used to.

“Last year we came back from Louisiana with the 4×400 meter first-place trophy when we ran against Southern (University), Grambling and LSU’s B-team,” Ross said. “We were able to bring back a championship trophy, so I’m working on our 4×400 being just as strong as we’ve known them to be in the past.”

Ross said this year’s team has more individual runners, and she’ll know where the team’s strengths and weaknesses are after the Birmingham meet.

“This year, I’ll have to say this is the most challenging year yet even though this is my fourth season,” Ross said. “I’m used to everyone being able to run a series of events versus this year where I have individuals who run specialized events versus one person being able to run the 100, 200 and the 400. It’s kind of split up this year, so I’ll know after Birmingham Southern how well we’re looking.”

The Ellwood Christian Academy Eagles controlled portions of their game against Jackson Academy at Bloch Park on Tuesday, but could... read more