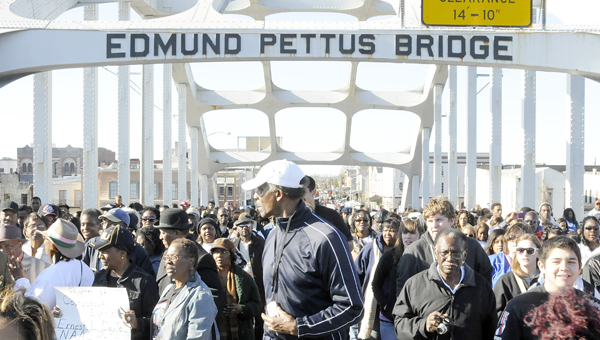 Thousands of marchers jammed the Edmund Pettus Bridge — and much of downtown Selma for that matter — during Sunday’s re-enactment and commemoration of “Bloody Sunday.” The annual crossing is part of the Bridge Crossing Jubilee, which culminated with the march. -- Robert Hudson

The annual Bridge Crossing Jubilee came to a dramatic end Sunday as thousands of marchers converged on downtown Selma to re-enact the crossing of the Edmund Pettus Bridge and commemorate the events of March 7, 1965 — otherwise known as “Bloddy Sunday.”

“It’s just an opportunity, like I was telling my daughter, for us to thank those people who had an opportunity to provide some leadership and help give us our voting rights and the opportunity to have equal rights and footing in American society,” said Dr. Carlton McHargh, who came from Tuscaloosa with his family to participate. “This is probably my seventh or eighth time … this time I had the opportunity to bring my little brother from Big Brother, Big Sister, and my oldest daughter … and I’m just excited for them to participate in something that’s been very important to me for a long, long time.”

Mobile resident Lula Stewart said she came to the bridge crossing to show her support for the entire Bridge Crossing Jubilee.

“It’s a feeling of jubilation, a feeling of elation, and a feeling of just being a part of something great,” Stewart said. “I want to support the effort because I don’t want to see this thing go away. The more people support it, the more it will go on.”

Stewart said it’s important to commemorate the bridge crossing and show appreciation for those who made the ultimate sacrifice.

“It meant that people died so that they and others could have rights that were not afforded to them originally,” Stewart said. “And they were really willing to go so far as to lose their lives. That’s the ultimate sacrifice.”

James Owens of Tuscaloosa came with his family in order educate them on black history.

“I brought my son and my niece and nephews with me who are all young and coming up in age, and I’m just trying to give them the feel of black history, especially the part that Alabama took in it, and explain the importance of the crossing of the Edmund Pettus Bridge to them as they grow older, so they won’t be coming into something blind when people start to ask them how they feel about black history,” Owens said. “To me personally, it kind of takes me back to my roots, and trying to see the struggle that the black people went through back then so that people like myself my age … could have the right to vote and have a say so as to the way that we are treated.”