Jackson: Theater has been a success 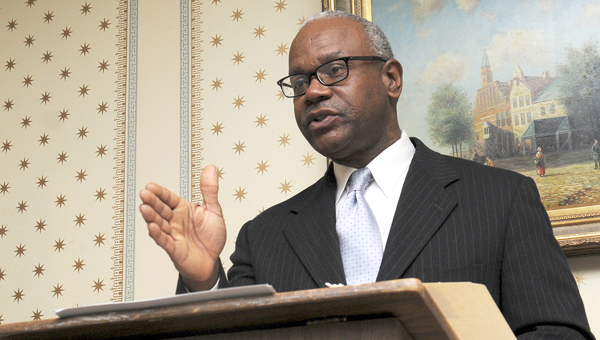 Dr. David Jackson talks about the movie operations at the Selma Walton Theater Wednesday with members of the Selma Exchange Club. -- Desiree Taylor

On Jan. 13, the newly revised Selma Walton Theater debuted to the public. And with such blockbusters as the Tuskegee Airmen-based Red Tails, Mission Impossible 4 and Winnie the Pooh having already premiered, the theater has become an attraction that some say rivals cinemas in Prattville and Montgomery.

Ohio native and theater manager Dr. David Jackson spoke about his vision for the theater to members of the Selma Exchange Club Wednesday.

Jackson, who spent 27 years in California before moving with his wife Sharon to Selma in early 2011, was passionate about bringing a little bit of Hollywood to the Queen City.

Jackson said after much research and bringing the proposal to the city, he and his wife later made an investment.

“I’m the kind of person, I don’t complain … we said, ‘what can we do to change this?” Jackson said. “Two years ago I’d never thought I’d be here in Selma. It’s marvelous (that) we have a picture show to go to in Selma and not have to drive to Montgomery.”

With updated surround sound and digital projection systems similar to ones in Montgomery and Prattville, Jackson said the theater currently seats 260, and has seen solid crowds.

“It is first-run movies, ones opening up across the country,” Jackson said. “It’s a good bonding time for parents and a good opportunity for the kids to get something wholesome.”

Jackson hopes the theater will make an impact. Jackson believes the public should have a quality, movie going experience.

“I’m trying to make a difference in the town … we took a risk (but) I’m sold-out and bought on Selma,” Jackson said. “Our vision for the theater … it’s a place where we’re building the community … it’s a safe community, where they (the public) can laugh together, cry together (and) relationships are forming there.”

A free showing of Courageous will be shown Sunday at 2 p.m. For more information, visit selmawaltontheater.com or call 874-6691.

Historic Water Avenue will soon play host to an inaugural event that has a local charity beaming and area stomachs... read more