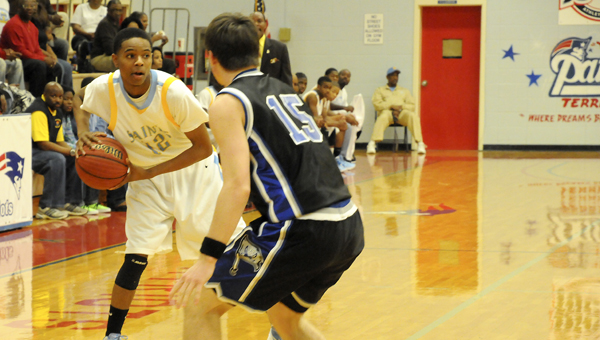 The Saints played fast and aggressively on both sides of the ball to cruise to an 81-58 win and a trip to Mobile.

Every time a Rebel player touched the ball there seemed to be two Saint defenders ready to take it away. Selma head coach Woodie Jackson said he hopes his team can continue its fearless play when it heads south.

Rehobeth jumped up to an early 4-0 lead, but it did not last. Once the Saints shifted into high gear, they were unstoppable. Selma moved the ball around and found open shots on the way to a 25-12 first quarter lead.

In the second quarter, the press was on and Rehobeth had absolutely no answer. On several occasions, the Rebels were not even able to get the ball across midcourt before swarming Saint defenders took it away.

Forced turnovers and spot-on shooting fueled by Demarco Gunn, who had 20 points, and Kerry Mitchell, who had 14, helped the Saints head into the locker room with a commanding 46-25 lead.

In the third period, the Saints seemed to let up a bit. A relaxed defense allowed Rebel players to pick their shots and chip away at the lead. The Rebels outscored Selma 17-13 in the quarter and, at one point pulled to within a 57-42 score.

However, the first half lead gave Selma plenty of breathing room, and when the buzzer sounded, Selma still had a 59-42 lead.

Jackson said he warned his team they had to play with a sense of urgency, because the entire season is on the line.

“This is a sub regional, and if you don’t win you go home,” he said. “You have to play with some intensity, and we did a good job of that tonight. We did a better job on defense than we have in a while.”

In the fourth, Selma heated up once again and kept the Rebels well out of reach.

The Saints did face a scary situation when Darion Alexander, who had 10 points on the night, went down with a leg injury. However, it did not seem to be serious.

Dallas County High School’s William Lee prepares to put the finishing touches on a dunk during an 87-69 win in... read more