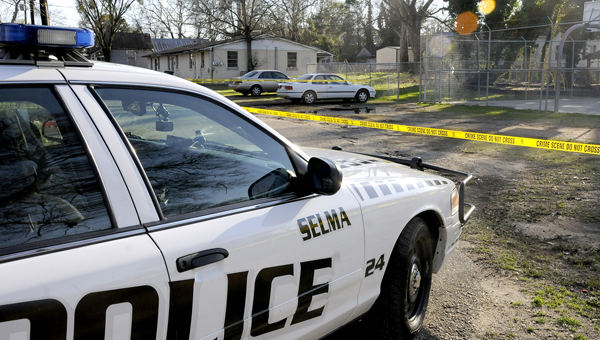 Selma Police officers responded to this area of Gamble Alley near the basketball courts after shots were fired Friday afternoon. -- Rick Couch

A shooting suspect who was on the run only made it for a short sprint Friday afternoon.

Trey Moore, 19, was taken into custody by the Selma Police Department after shooting the victim in the leg at about 3:35 p.m.

Selma Chief of Police William T. Riley said Moore did not run very far, or for very long before officers were able to apprehend him.

“Officers responded to the area of Gamble Alley in reference to a shooting,” he said. “When they arrived, individuals on the scene told officers the victim had already been transported to the hospital by a private vehicle. They also advised officers on where they had seen the shooter run. Concerned citizens directed officers to the area in the 800 block of Union Street and found the suspect hiding underneath a residence.”

The injuries to the victim, Riley said, do not appear to be life-threatening, however, the department is still gathering information.

“The victim suffered a gunshot wound to the leg and he is being treated at a local hospital,” he said.

The suspect has been charged with assault first degree and was still being questioned Friday afternoon.

Moore also had an outstanding warrant for a burglary second degree charge.

Riley said officers are still gathering information on what led to the shooting.

“Right now, we’re not sure what started it,” he said. “The investigation is ongoing. We’ll have to talk to the victim.”