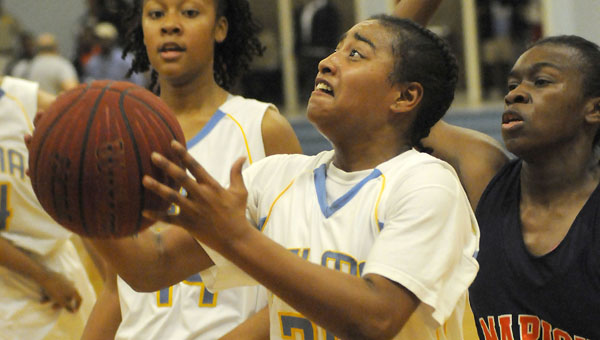 It was a tightly contested first half, but the Selma Lady Saints took control and cruised to a 59-39 victory over the Francis Marion Lady Rams Friday at Wallace Community College-Selma.

Anthony Harris, head coach of the Lady Saints (20-3, 6-0), said his team got off to a slow start, but the play of senior point guard Jonishia Jackson and team defense helped carry it to victory.

“We were a little shaky in the start, but we played pretty good,” Harris said. “Jackson ran the offense and we played good defense.

In the second half we went on the attack.”

The Lady Saints led 25-17 at the half, but turned it on in the second half behind 6 points in the third quarter from Jackson.

Selma outscored Francis Marion 19-7 in the third quarter and never looked back.

Jasmine Peeples led the Lady Saints with 16 points, while Jackson and Jameneshia Caver had 10 points each for Selma.

J’Tia White added 8 points off the bench for the Lady Saints.

Harris said the victory marks nine years of 20 or more wins for a Lady Saints’ program that also locked up its seventh area title in nine years a week ago.