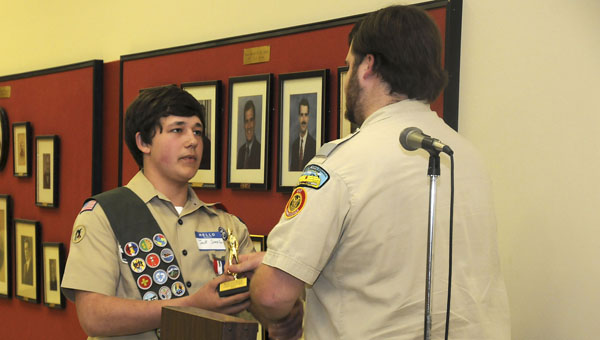 J.D. Bonner presents Jack Steele with the annual Good Turn Award. Steele, a senior at Wilcox Academy, was honored for his response to a car accident in Camden. -- Rick Couch

Several scouts and leaders were presented with awards during the 2011 Crane District Eagle Recognition and Awards Banquet Friday night. Among them was a young man from Camden who showed what scouting is all about during a scary situation near his Camden home.

Wilcox Academy senior Jack Steele, who was the recipient of the Marion Lee Melson Good Turn Award, was honored for his response to an automobile accident that involved one of his friends.

Fellow Eagle Scout J.D. Bonner was on hand to present Steele with the award. Bonner said Steele, who is a member of Troop 94 in Camden, came home one afternoon in May and learned one of his friends had been involved in a serious accident.

A family fleeing the Tuscaloosa tornadoes had struck the friend. While Jack’s friend was fine, the driver of the other car was not as lucky. She was rushed to the hospital and then taken to Mobile. Unfortunately, her children could not go along. That, Bonner said, is where Steele stepped in.

“When Jack’s father went to get him to go home from the ER, he found that Jack, a friend, and the friend’s mother were taking care of the children,” he said. “Jack responded that he wanted to stay until the DHR worker arrived. He kept the children calm by playing with them until the worker arrived at about 3 a.m.”

Steele said when he stayed behind with the children he never expected any accolades.

“I wasn’t expecting to get awarded for it,” he said. “It just seemed like the right thing to do.”

During the entire afternoon, Bonner said Steele conducted himself as a scout should. He showed great compassion and leadership.

Dr. William Abernathy Jr. and his wife, Carletta, point out a photo of his uncle, Ralph David Abernathy, standing next... read more