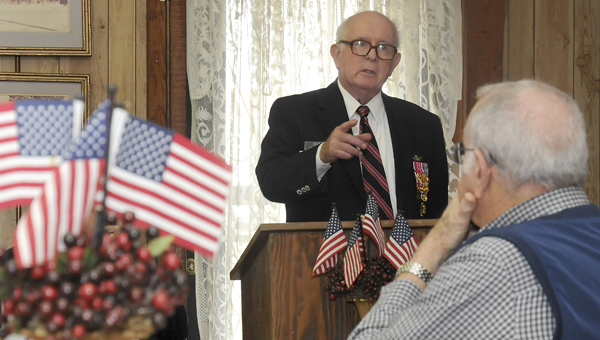 Retired Lt. Col. Joe Berry addresses a group of Selma Korean War veterans Wednesday on stories of combat and the rebuilding of the east Asian country. Berry served in Korea and Vietnam during his days in the Army. -- Rick Couch

Though many refer to the Korean War as “The Forgotten War,” a group of Selma veterans take time each year to get together and remember. This year was no different.

The group gathered Wednesday afternoon at Grumble’s Alley to discuss everything from families to tours.

The group, member Whet Wilkinson said, started meeting in the late 90s and those who attend always look forward to getting together.

“Each year we do this and try to get together,” he said. “We started out 14 years ago, and we continue to get together each year to catch up and see what is going on with one another.”

The 2012 meeting featured retired Lt. Col. Joe Berry, who was an Army aviator and former instructor at Marion Military Institute.

He arrived in Korea in 1957 as an infantry aviator in the 7th Division and later served tours in the Vietnam War.

When he first arrived overseas, Berry said he left a lot back home.

“I was not happy being in Korea,” he said. “I left a wife, I was newly married and she was pregnant. My first child was born while I was in Korea.”

Eventually, Berry said he ended up at Fort Benning, where he thought his career would end. But, he said, he would once again find himself in east Asia.

“They told me ‘you’re going to be here quite a while at Fort Benning,” he said. “We planned our last child and the Army said ‘go to Vietnam.”

When the Korean War first broke, Berry said he was eager to get in on the action, but was too young.

“I had been working in the yard and came inside and my mother said ‘you need to come in here and listen because we are going to war,” he said. “My thought was how can I get into that? I thought I had to go to war and I wanted to be a part of it, but I was still in high school.”

Eventually, Berry did make his way over to Korea, where he slowly gained respect for the South Korean army.

“They had a reputation to cut and run,” he said. “But they just needed some training. We had about 100 Korean soldiers with each unit and they became more disciplined units.”

During his tours, Berry said, Korea was not a place most would want to visit. The fighting destroyed most of the trees and scenic beauty of the country.

However, today, Berry said, the nation has recovered completely. Berry said he met a Korean family and joined them for dinner. The family showed him photos of the country’s present state, which was surprising.

“They showed me pictures of what Korea looks like today and it is luscious trees and forests everywhere,” he said. “They’ve got superhighways all over the place. It’s not like what you or I had.”

Berry said he was proud to see the country back on its feet.

“It was an amazing difference,” he said.

Ashley Grimes works around an Enterprise defender. Grimes led the team with 30 points. -- Robert Hudson Buried in a... read more