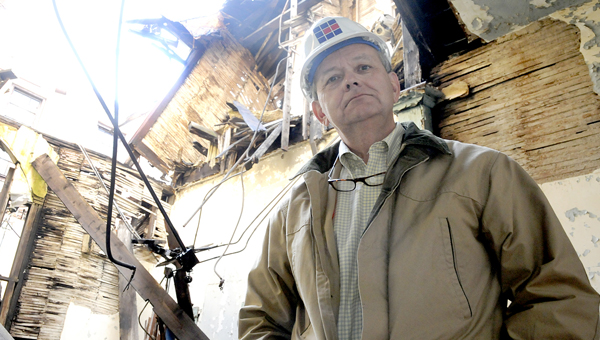 Tom Bolton stands inside the old YMCA building on Broad Street where a portion of the ceiling, third floor and second floor had completely collapsed, exposing the building to the elements. -- Rick Couch

Editor’s note: This is the first in a series examining the current condition of the old YMCA building in Selma’s downtown on Broad Street and how the historic building fell into such condition and what its future might be.

When Tom Bolton took ownership of the old YMCA building on Broad Street from the First Baptist Church, he did so sight unseen. That’s something — as he looks back on it — he would have done differently.

“I am like a doctor who has to go and tell a family the bad news,” Bolton said during  a tour of the building that showed a portion of the ceiling, third floor and second floor had completely collapsed, exposing the building to the elements. “The patient is critical. There is nothing I can do and there is only one solution.”

For Bolton, the ongoing debate over the status of the building, its condition and its future has been frustrating, but there might be an end to the discussion in sight.

On Friday, Selma Ward 3 City Councilman Greg Bjelke, through his relationship with the Selma-Dallas County Historical Preservation Society, said the group has Bolton a “proposal” that he hopes would at least maintain the historic building’s façade.

“Friday afternoon, the society took a proposal to Tom’s attorney [John Calame] where the society or the city would at least stabilize the façade of the building and then take it from there,” Bjelke said.

The full details of the proposal were not made available, but not even Bolton was aware of any proposal, even as late as Sunday evening.

“With respect to an offer from the historical society, I am currently unaware of it and I was in the office until 4 p.m. Friday,” Bolton said in an email Sunday.

In a separate email, Bolton was under the impression the city council is set to declare the building a public nuisance at their meeting Tuesday evening, but Ward 8 council member Corey Bowie said he did not believe that item was scheduled to be brought up and did not appear on any meeting materials he had reviewed.

Regardless of the proposal offered Friday or plans by city leaders, the fact remains the building that once stood so strong, so proud along Selma’s main thoroughfare is a shell of its former self and has become a safety concern for Bolton and his neighbors.

“With the economy and the ability to get grants today, there is simply not enough money to save it.”

“I am concerned for the safety of my employees, my tenants upstairs and my customers,” Swift said.

“If that building collapsed and came through my wall, it would put me out of business for a long time. It really would.”

Council president Cecil Williamson has placed on Tuesday’s agenda a discussion on both the old YMCA building and the Teppers Building in downtown.