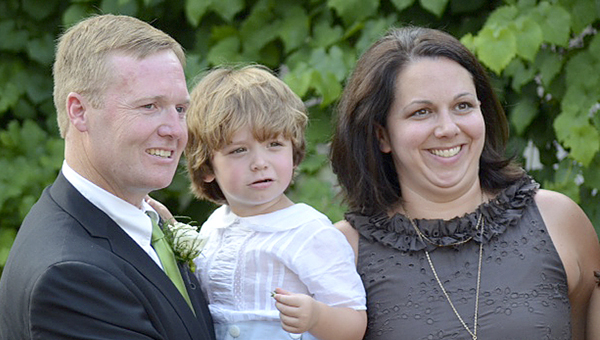 Andrew Arrington, an attorney with the Alabama Attorney General’s Office, was recently awarded the 2011 Barrister’s Award. Andrew is pictured with his wife, Darien and his son, Grant. -- Special photo

Awarded each year to trial lawyers who have had a successful year in court, Division Chief for Violent Crimes of Attorney General’s Office Don Valeska, recommended Arrington for the award in the field of “Trial Advocacy.”

“Taking a 10-year-old murder case like he did … Andy worked that case up to nothing and brought it to grand jury,” Valeska said. “He represents it (the office) excellently with his hard, absolute preparation that you have to have for a case that goes before the grand jury.”

“The case” involved Albert Wilding of Montgomery, 83, who murdered his wife Judy in 2000 and only served 1-and-1/2 years for the murder. Local authorities would not prosecute Wilding concerning the murder because Judy’s body was never found. After the Attorney General’s Office arrested Wilding in 2008, and three years of grand jury and trial presentations, Wilding plead guilty in 2011.

“Wilding had remained in the county jail for three years while we appealed his bond being granted by the circuit judge,” Valeska said in a release. “We were successful in appealing the bond issue to the Alabama Supreme Court, and the resulting opinions created favorable case law for capital prosecutions statewide.”

Valeska credits Arrington’s hard work during the case as the reason for the office’s victory.

“He probably works a 70-hour to 80-hour workweek,” Valeska said. “The outstanding work of Andrew Arrington in this case deserves the award for ‘Outstanding Litigator of the Year … the taxpayers are very fortunate to have him represent them.”

Arrington, who clerked in the Alabama Supreme Court, received his law license in 1998.  Arrington called the award an “honor.”

“I was very surprised,” Arrington said. “I don’t think I do anything special — I just try to do my job in the best way I can … I work with great people — it’s an amazing office; I love my job, I love prosecution and I love working for the Attorney General.”

Arrington is married to his wife, Darien, a Selma native. The couple has one son, Grant.

During the holidays and throughout the year some homeowners prefer to add lights and wreaths to their homes to give... read more