Banks partner to give books to schools 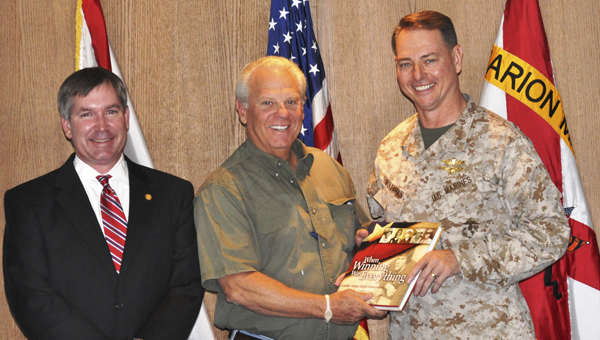 Van Carter of First Cahawba Bank said the book gives students a chance to read about the local and national heroes.

“Our board of directors consider this book a significant historical record of the military service of approximately 325 World War II veterans and simply want to provide the opportunity for today’s young people to read about some of our state and nation’s heroes,” Carter said.

The book recounts the experiences of former University of Alabama football players who served in the military during wartime, including Selma natives Jack V. Brown and Bob Ed Morrow.

Brown was a three-time All-State basketball player and All-Southern football player at Selma High School in the 1940s before serving in the Army during wartime. He played football at Alabama after the war ended and was elected team captain in 1951.

Morrow was also a standout athlete at Selma High School and played guard for Alabama 1932-34 before serving as a major in the Army during World War II.

Carter pointed out that the book reveals that 13 of the former Alabama players lost their lives in the war and that two were nominated for the Congressional Medal of Honor.

“A former Alabama football player can be found in every significant battle of the war,” Carter said, “and this book offers a well-deserved tribute to them in addition to relating the history of World War II on a personal level.”

MMI president Col. David J. Mollahan, USMC (Ret) received the book for his school. The publication was commissioned by Paul W. Bryant Jr., Chairman of Bryant Bank, and published by the Paul W. Bryant Museum at the University of Alabama.

It was written by award-winning author and journalist Delbert Reed of Tuscaloosa.