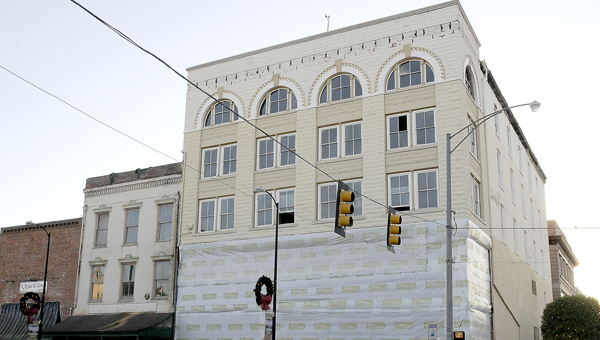 The Selma City Council discussed plans and policies in regard to the Teppers Building Tuesday night. Some members of the council would like to see the building renovated as soon as possible by its owners. -- Rick Couch

Just hours after a sounding defeat in July’s special election to fill the open Ward 3 position on the city council, Freedom Foundation president Gwen Brown said she wanted to turn her attention to community projects and funding for the group’s renovation of the Teppers Building.

Now more than five months later, work on the building has not restarted and the Selma City Council is running out of patience.

During Tuesday’s council meeting, Mayor George Evans and the council discussed what is being done — or not being done — on ensuring the long-time feasibility of the iconic downtown building.

“I met with Gwen Brown and Cheyenne Webb Christburg recently about the building and the plans they have in Selma,” Evans said. “And what they want to do is come back in the spring and renew their work on the Teppers Building.”

After the council meeting, Evans said he did not try to pressure the group.

“I just wanted to find out what their plans were,” Evans said. “It is their building and what they plan to do with the building is their decision. At this point, that’s all I can say to them.”

Council president Cecil Williamson, who had requested the item be added to Tuesday’s agenda, was less understanding of the building’s condition, noting renovation work has been stalled “for quite some time.”

Williamson pressed the mayor for more details on the meeting he had with Brown and Christburg, commenting that “spring is a season that goes from March through June.”

“I think they should be evncouraged to begin work in the spring like they promised to the mayor,” Williamson said. “If they do not, then I think the council should be ready to take action.”

As for the action the council may take, Williamson said the city could declare the building a public nuisance and do the work itself. He also added any work the city might do on the building would be at the building owners’ expense.