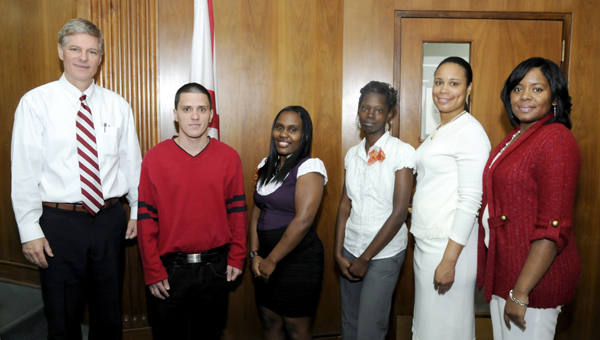 If the path to success is paved one brick at a time, nine individuals who graduated from Dallas County Adult and Family Drug Court have been working overtime.

Friday, local leaders, counselors and support systems gathered at the Dallas County Courthouse to recognize the hard work these individuals put in to turn their lives around by offering words of encouragement and presenting the graduates with their certificates.

“The people that make mistakes are good people and they are not criminals,” he said. “They need an opportunity. We are giving them a chance.”

Armstrong praised the work of Miah Jackson and Myesha Tolbert and everyone else who helps make these programs run successfully.

Those who graduated offered the most praise. Jasmine Richardson, who received her certificate, said she never realized she had so many people in her corner until she became committed to the program.

“This hasn’t been easy — it took a lot of prayer,” she said. “I’m glad that I have so many people that care about me and allowed me to start back caring about myself.”

Initially, Richardson said she was hesitant, but came around when she realized the program could help.

Another graduate, Blake Lewis, said the program was an eye-opening experience.

“It has been the best decision I could have made,” he said. “Since joining the program, I have started school at Wallace. I’d like to thank Mrs. Jackson and the drug court staff for all the hard work they do and thank Judge Armstrong for giving me the opportunity.”

Many times, District Attorney Michael Jackson said, people come into the program with a similar attitude to that of Richardson. And, like Richardson, he said they often become more receptive when they see the benefits.

“We have a lot of different programs, that, for some reason, a majority of people take for granted,” he said. “A lot of times people get in these programs and see how many people care and end up succeeding and trying. That’s the main thing, trying.”

Sometimes, Armstrong said, tough love is required to help people make positive changes. Little, by little, he said they develop a sense of responsibility that will help in every aspect of their lives.

“These programs that we have are opportunities for people to turn their lives around,” he said. “They’re not babying people. This is not just a get out of jail free card. These programs are tough and require a lot of work. There are tons of accountability.”