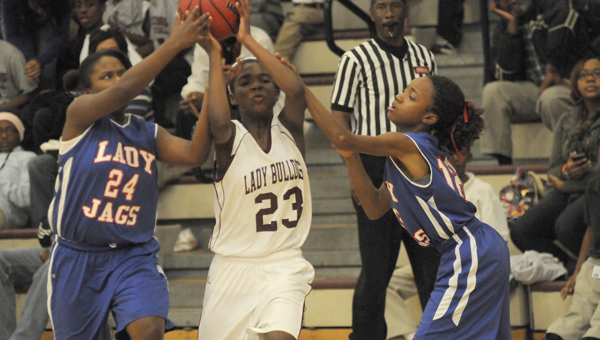 After trailing for most of the fourth quarter, the Selma Middle CHAT Academy Lady Bulldogs were able to claw back and defeat the Camden Lady Jaguars 31-28 in the closing seconds of the game Thursday.

The Lady Bulldogs (8-2) used strong defense to pull the win out in the end.

“We switched from our zone defense to our more aggressive defense,” said Martina West, head coach of the Lady Bulldogs. “We went man to man, put our best defender on their best ball handler and we pulled it out.”

With the Lady Jaguars leading 28-25 with 0:57 left to play, the Lady Bulldogs would fight back, as Dytavia Johnson would lay it in to cut the score to 28-27.

Using a full-court-press defense, the Lady Bulldogs would force a turnover and score on a fast break to go ahead 29-28 with 0:26 left.

The Lady Jaguars would have a chance to go ahead as they were sent to the line after a technical foul was called on the Lady Bulldogs, but failed to convert on two free throw attempts.

But the Lady Jaguars would have the ball back on the next inbound with 0:18 left, but Selma would steal the inbound and Johnson would lay it in on the fast break to seal the victory.

After battling back and forth for the first three quarters, the Selma Middle CHAT Academy seventh grade boys pulled away in the fourth quarter to defeat the Camden Jaguars 46-39 on Thursday.

“We played together as a team, as a family,” Dunn said. “Everybody that got on the court hustled, played hard. I think we played with a lot of heart. Defense won the game. We got some good steals.”

After the first three quarters included eight lead changes and three ties, the Bulldogs would hold a 36-28 lead early in the fourth.

The Jaguars would fight to within six points at 36-30 with 5:13 remaining, but Tyquills Chappell would score down low to extend the Bulldogs’ lead to 36-30.

The Bulldogs would force a steal on the inbounds pass and come right back with a lay in by Ga’Vontae Sanders to make the score 40-30.

Selma would capitalize off missed shots by the Jaguars and Brandon Hatcher would score under the basket to put Selma up 42-30.

The Jaguars would fight back, but ran out of time.

Hatcher led the Bulldogs with 10 points, while Fred Richardson and Kenderic Holmes added 7 points a piece for Selma.

Soccer is a family affair for Dundores

The Dundore sisters played soccer together this fall at Judson College. Pictured are (from left) Lisa, Emily and Grace Dundore,... read more