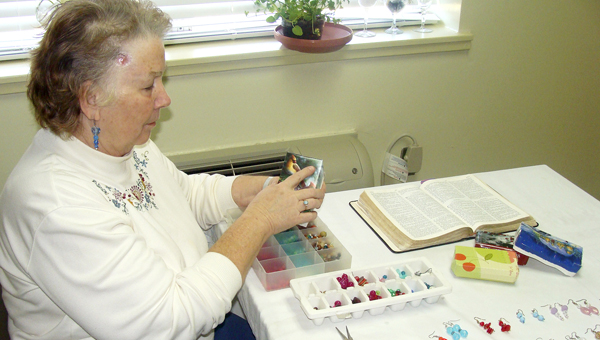 Thanks to the rehabilitation efforts at Warren Manor, Sandra Harrison is once again enjoying her passion of making jewelry. -- Special photo

It was about four years ago when Sandra Westbrook Harrison had an aneurysm, resulting in an immediate total change in her active lifestyle. After all she is a retired registered nurse, Navy civil service secretary and wife of an Air Force sergeant. She is also the mother of one son, J. Carlton Sapp. Harrison is a native of Sebring, Fla., but has lived in Valley Grande for most of her life.

Her aneurysm left her with both cognitive and functional mobility deficits along with a lack of desire to participate in a hobby she loved called “jewelry-making.” It had been five years since she made one pair of earrings until her admission to Warren Manor Health and Rehabilitation as a resident after a brief hospitalization. Her love and renewed interest in making jewelry was sparked here at the rehabilitation center.

So how did Mrs. Harrison get started making jewelry?

Five years ago when she saw an ad in the The Selma Times-Journal that read, “if you want to learn how to make jewelry, come to the library.” She answered the ad and that’s how it all began.

Initially she began selling jewelry at the old Gibson Shopping Center in Selma. She learned to make all kinds and colors of necklaces, earrings, and bracelets. She even made wooden ones, but for those, her husband, James, would drill the holes to allow the pins to go through.

Occupational therapist Clarissa Smith explored her leisure and therapeutic hobbies during an initial evaluation that revealed her expressed desire to once again make jewelry.

Occupational therapists are trained to assess the patient’s level of independence both past and present which often includes: psychosocial and leisure tasks after an impairment.

Smith noted Harrison needed a sense of purpose and had a heart for giving care to others. Not surprising, Harrison has even taught Smith the art of making your own jewelry too.

“I love earrings too,” Smith said, “and making jewelry is a lot of fun that allowed me to use more of my creativity. It’s important to know the history of our residents because often times we’ll discover their hidden talents and gifts. I learn a lot just by listening to my residents.”

However, it took a team approach to allow Harrison to succeed at producing such an array of earrings here at the facility. For example, physical therapy assisted by enhancing her standing balance and encouraging her to pace herself due to her limited endurance. Speech therapy was critical in assisting Harrison in organization, sequencing, and facilitating memory details necessary to complete a task. Nurses and dietary department ensured that adequate nutritional intake and medical stability took precedence. Social services played a vital role in ensuring the involvement of all pertinent family members, such as her husband.

Furthermore, the activities department at Warren Manor facilitated the set-up of jewelry supplies and equipment in her room, while encouraging her to remain involved in ongoing energizing facility activities.

Since her admission to Warren Manor Health and Rehabilitation Center, she has been actively rediscovering her love for people, the residents and her craft to make beautiful jewelry. In fact she is designing her own jewelry and special gift boxes for the residents for holiday gifts.

“I love seeing the look on their faces when they see all of the earrings I’ve made,” Harrison said. “This makes me feel proud, but I owe everything to God. I really enjoy being here at Warren Manor and especially the activities and food.”