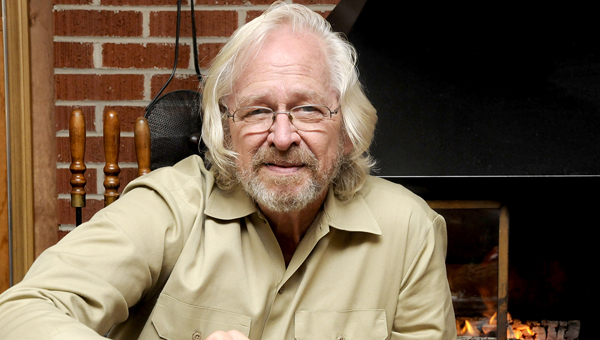 Dr. David Schell, a retired professional counselor, recently shared his battle with cancer in a book titled “Holy Cow I Have Cancer.! Now What?” Schell said the idea for the book came from his own advice to patients to document their battles. -- Desiree Taylor

“Grab a shovel and dig,” Dr. David W. Schell, retired professional counselor and marriage and family therapist said with intense eyes. “Human needs are so big. I didn’t have a big shovel but I had a pen.”

After seeing hundreds of clients and telling them to journal their life experiences throughout his nearly 40-year career, Schell had to take the advice he gave to others after being diagnosed with Stage 4 colon cancer almost two years ago.

Why me? Ain’t it awful? Poor me! were the all too common phrases rushing through Schell’s mind at the time.

“My first feelings were absolute white-hot rage,” Schell said recalling the ‘donut ride’ of the MRI testing. “A small voice said, ‘David, you have forgotten to be grateful.’ I was on a gurney next to a man who was in a motorcycle accident — couldn’t feel his body from the neck down. I walked out of the donut with a spirit of prayer for that man … it was a turning point for me.”

Without treatment, Schell said statistically, he would only live six months — and with treatment, just 24 months. After taking aggressive chemotherapy treatments for one year, Schell began journaling his emotional, physical and spiritual journey with the disease and eventually turning it into a book titled, “Holy Cow I Have Cancer! Now What?”

“I made entries at different variables throughout the year,” Schell said, who calls the work an act of love for sufferers and their families. “It broke my heart to not be able to practice.”

Having been active — walking 2 to 3 miles every day beforehand, Schell said the treatments hit him like a “chemical truck,” leaving him at times bedridden.

“I spent 72 hours in bed from medication,” Schell said. “I felt useless … I had gotten to the point where I really wasn’t able to do much … I lost my career, I was frustrated. I said, ‘you’re just stuck.’

After losing his wife Zela of 46 years to bladder cancer in 2005, in the end, Schell said he was comforted.

“She died in total agony — my wife died of cancer in my arms,” Schell said. “I went through horrible grief losing her; when she died … the most content and at peace look came over her face. She was a lady of deep faith. It’s as if she stepped into the arms of God.”

With cancer present on his liver and abdominal wall, Schell takes treatment infusions every three weeks to keep blood vessels from forming new growth. Despite the inevitable, Schell considers himself a “winner.”

“If you’re angry with God, it doesn’t matter if you suppress it or repress it — God knows it’s there, so it’s best to let it out,” Schell said. “I have a choice. I can live my life dying or live my life living. If I died tomorrow — I had today. I’ve learned something: God’s love and his grace is greater than my rage.”

Schell has one daughter Kymn and two brothers John and Dan, who were also diagnosed with cancer, and helped contribute to the book.

The book is available online at www.Amazon.com

Changes in regions and classifications will make putting together a football schedule a little tougher for Dallas County athletics directors.... read more