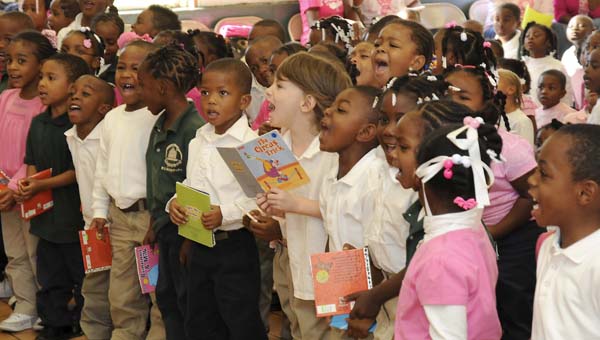 Students from Edgewood Elementary School do not plan to take a break from learning during the Thanksgiving holidays. The students took home work packets so they could stay sharp during the one-week break. -- Special photo

Just because schools are closed, that doesn’t mean students will completely put away their books and lessons.

When the students filed out the doors for their one-week Thanksgiving break, Edgewood Elementary School sent them off with work packets so they can keep their skills sharp during the holiday break.

“We sent packages home with the students to have work to do while they were at home, so they can study and continue to practice at the skills that they’ve learned lately,” said Joe Peterson, principal of Edgewood Elementary School. “They’re study packets and worksheets that more or less reinforce the concepts they’ve been taught … making sure they know their multiplication tables and they’re getting practice sheets on multiplication and division.”

“Fifth grade is doing basic algebra like solving for the variable in the equation and stuff like that, and place value,” Peterson said.

“It’s just practice sheets so they can go back and refresh their memory and keep their memories sharp.”

Students are also encouraged to read over the break, as they have been all year through Edgewood’s accelerated reader program.

“Of course, the big thing is always reading,” Peterson said. “They’ll have some reading passages, they’ll have their library books, which they’re encouraged to read over the holiday, and when they get back they’ll take an accelerated reader test on that book to see how well they understood it and then they’ll receive points toward our reading contest.”

Peterson said he knows students will use the off week to enjoy themselves, but he believes the packets will prove to be a positive thing that will ensure students can pick up where they left off when they return to class Monday.

“I think it’s tremendous because it keeps them sharp,” Peterson said. “They’re home with idle time. Of course, they’re going to spend some time playing and enjoying Thanksgiving itself as well as watching television, but they’re not going to have a total disconnect from academics because we’ve sent the packages home and it’s going to help them.

“It’s going to keep them sharp and build on what we’ve already taught them, so I think it’s going to be a major plus.”