Visit drew Forner back to Selma 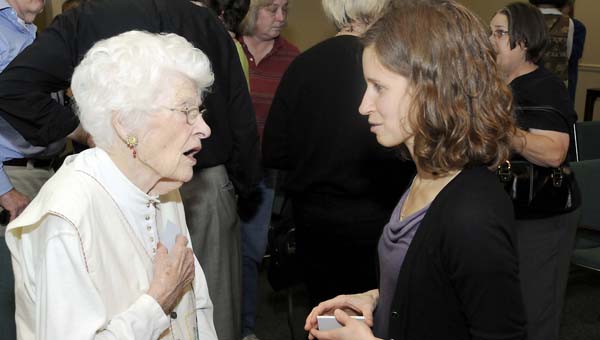 While much research has been written on Selma’s Civil War history and its journey through the 1960s, Duke University graduate student Karlyn Forner is doing what few have attempted  — she is approaching an entire century.

In four months of research in Selma, Forner has concentrated her efforts on Dallas County’s journey through the 20th century, which, she said, has been quite fascinating.

“Selma has a lot of complicated history before 1965 and after 1965 and nobody ever really talks about that,” Forner told those who gathered to hear her discus the earlier years of the 20th century at the Selma-Dallas County Library Monday. “What I am doing is looking at the social, economic, political relationships of people in town — what daily life was life for both black and white residents in town throughout the course of the 20th century.”

Since August, Forner said she has been reading old issues of the Selma Times-Journal to get a better idea of everyday life in Selma. When the project is complete, Forner said she hopes to have covered 1901 through 2008. So far, she said she is up to 1942.

One of the problems Forner said she has encountered is a skewed view of the town through the eyes of early articles. Many times, she said stories were steered in a certain direction by influential business owners and others with political power. Forner said she has also relied on stories from citizens of Selma.

A surprising aspect of her research, Forner said, is the Jewish influence in Selma through the years.

Forner, who grew up in Minnesota and attended the University of Wisconsin at Madison, said she first visited Selma on a civil rights bus tour and moved to the Queen City for six months in 2005 after completing her undergraduate degree in history.

After that first visit, Forner said she felt a calling.

“I still don’t have words for it, but there is something about this place,” she said. “I spent the last eight years of my life thinking about Selma and I knew I wanted to go to graduate school in the history department. I had no choice but to write my dissertation on Selma. There was just not another option.”

Before spending time in Selma, Forner said most of her information about the South consisted of stereotypes. Now, she said she has gained a clearer picture.

Though Forner will return to Duke to satisfy teaching obligations for the winter semester, she said she plans to return often to continue her research. Eventually, Forner said she would also like to convert the information she gathers into a book.