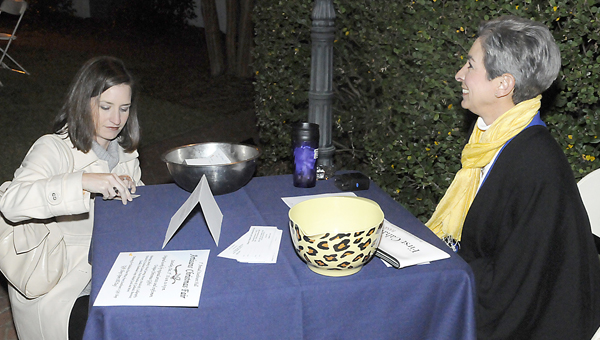 Thursday night the Selma Rotary Club made the transition from wine and cheese to chants and cheers when the first “Tailgatin’ and Fundraisin” event kicked off at Sturdivant Hall.

The change proved to be a popular choice as people flooded the grounds to talk football, catch up with old friends and enjoy live music, drinks and fun.

Early in the afternoon, the event’s organizer Renee Wilkerson had already noticed a newfound enthusiasm for the event.

“It’s really great,” she said. “We have had a lot of younger people and a lot of people in the community have been talking about it. We’ve had a really good crowd.”

The tailgate, Wilkerson said, targets a larger audience than the wine and cheese event, which, in turn, helps the club raise more money for  its community service projects.

The tailgate, Wilkerson said, will likely replace the wine and cheese party based on its strong draw Thursday night.

“We’ll probably keep it, and we hope we will have a bigger response next year,” she said.

The money raised from the event will fund projects throughout the year, Wilkerson said.

In the past, the club has worked with local school systems, the Selma-Dallas County Public Library, United Way, Salvation Army, Journey School, and YMCA.

Scholarships are also awarded to Dallas County students each year.

Viking running back Devion Moore tries to turn the corner as Jet defenders close in. The Vikings won in a... read more